Evan Rachel Wood is an American actor and singer. Her parents, Ira David Wood III and Sara Lynn Moore, are both involved in show business. David Wood III, the executive director of ‘Theatre in the Park,’ cast her in his adaptation of ‘A Christmas Carol’ when she was just two months old. Naturally, she developed a strong affiliation towards acting. When her parents separated, she moved with her mother to Los Angeles. She made her television debut in ‘Once and Again’ and her movie debut in ‘Digging to China,’ earning positive reviews for the latter. She was at her best in ‘Thirteen’ where she played ‘Tracy Freeland,’ a pre-teen caught in the web of drugs, sex, and crime. Subsequently, she received nominations for ‘Golden Globe Award’ and ‘Screen Actors Guild Award’ for ‘Best Actress.’ In ‘Pretty Persuasion,’ she played ‘Kimberly Joyce,’ a precocious girl. ‘Across the Universe’ saw her play the role of ‘Lucy.’ ‘Running with Scissors’ won her the ‘Cannes Film Festival Chopard Trophy for Female Revelation’ for her performance. She got married to English actor and dancer Jamie Bell in 2012. Wood and Bell got divorced in 2014. American People
True Blood Cast
Jewish Actresses
Actresses
American Women
Childhood & Early Life:
Evan Rachel Wood was born on 7 September 1987, in Raleigh, North Carolina, USA, to Ira David Wood III and Sara Lynn Moore. Both her parents are actors. Her father is also the executive director of ‘Theatre in the Park.’
She has three brothers: Ira David Wood IV, Dana Wood, and Thomas Wood. She also has a sister named Aden. Wood and her brothers were involved in ‘Theatre in the Park.’ Her aunt, Carol Winstead Wood, was a production designer in Hollywood.
Her father cast her in his 1987 adaptation of ‘A Christmas Carol.’ She was also cast in ‘Ghost of Christmas Past.’ She was later cast as ‘Helen Keller,’ alongside her mother, in a production of ‘The Miracle Worker.’
She studied at ‘Cary Elementary,’ a public school in Cary, North Carolina. She then continued her studies at home, earning her high school diploma at the age of 15. 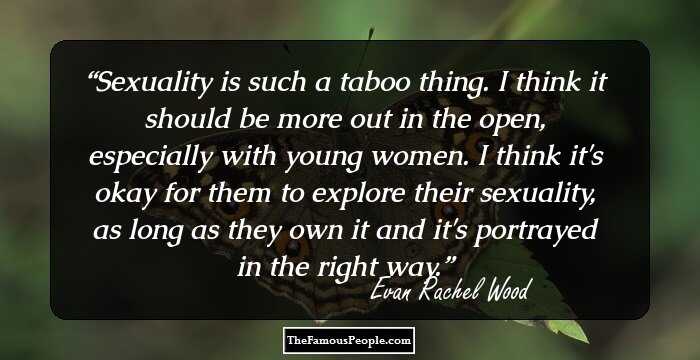 Who Is The Most Popular BTS Member?
Career
In 1996, her parents separated and she moved with her mother to Los Angeles. She was cast in ‘Once and Again’ as ‘Jessie Sammler.’
She played ‘Harriet Frankovitz,’ a young girl who befriends a mentally ill man, in ‘Digging to China,’ which starred Kevin Bacon and Mary Stuart Masterson. The film won the ‘Children’s Jury Award’ at ‘Chicago International Children’s Film Festival.’
In 1998, she was cast in the fantasy film ‘Practical Magic’ which was directed by Griffin Dunne. She played the daughter and niece of the characters, portrayed by Sandra Bullock and Nicole Kidman respectively.
In 2001, Wood landed the lead role of ‘Emily Lindstrom,’ an aspiring concert violinist, in ‘Little Secrets.’ She won a nomination for ‘Best Leading Young Actress’ at the ‘Young Artist Awards.’
In 2003, she acted alongside Cate Blanchett and Tommy Lee Jones in ‘The Missing.’ She also acted in the ‘Got Murder?’ episode of the TV series ‘CSI: Crime Scene Investigation.’
In 2005, she played ‘Lavender Wolfmeyer,’ one of four sisters handling the disappointment of their father's absence, in ‘The Upside of Anger.’ Wood’s character narrated the movie, which starred Kevin Costner and Joan Allen.
In ‘Down in the Valley,’ directed by David Jacobson, she played the role of ‘Tobe’ who falls in love with an older man, played by Edward Norton.
The 2007 released ‘King of California’ saw her in the role of ‘Miranda,’ the teenage daughter of a jazz musician suffering from a mental illness, played by Michael Douglas.
In 2007, she played young ‘Diana McFee’ in ‘The Life Before Her Eyes,’ which was directed by Vadim Perelman. The movie was based on Laura Kasischke’s novel of the same name.
Continue Reading Below
Wood played the estranged daughter of ‘Randy Robinson,’ played by Mickey Rourke, in the 2008 released film ‘The Wrestler,’ which was directed by Darren Aronofsky. The movie won the ‘Golden Lion Award’ for ‘Best Film’ at ‘Venice Film Festival.’
In 2009, she played ‘Melodie’ opposite Larry David in Woody Allen’s ‘Whatever Works.’ She played ‘Juliet’ in a fundraising production of William Shakespeare’s ‘Romeo and Juliet,’ directed by her brother.
From 2009 to 2011, she played the recurring role of ‘Sophie-Anne Leclerq’ in the ‘HBO’ series ‘True Blood.’ In ‘The Conspirator,’ she played ‘Anna Surratt.’ She also acted in ‘The Ides of March.’
In ‘Mildred Pierce,’ the 2011 ‘HBO’ miniseries, she portrayed the title character’s daughter ‘Veda Pierce.’ She was nominated for the ‘Primetime Emmy Award’ for ‘Outstanding Supporting Actor in a Miniseries or a Movie.’
From 2013 to 2015, she appeared in a number of movies, such as ‘A Case of You’ (2013), ‘Barefoot’ (2014), ‘Strange Magic’ (2015), and ‘Into the Forest’ (2015).
In 2016, she was cast as the sentient android ‘Dolores Abernathy’ in the ‘HBO’ science fiction TV series ‘Westworld.’ For her role, she was nominated at the ‘Golden Globes’ and ‘Primetime Emmy Awards.’
In 2018, she voiced the character of ‘Yi Lin’ in the English version of the movie ‘Flavors of Youth.’ The same year, she was cast to voice ‘Queen Iduna’ in ‘Frozen 2.’ She was also cast to play ‘Old Dolio’ in a crime drama film titled ‘Kajillionaire.’ 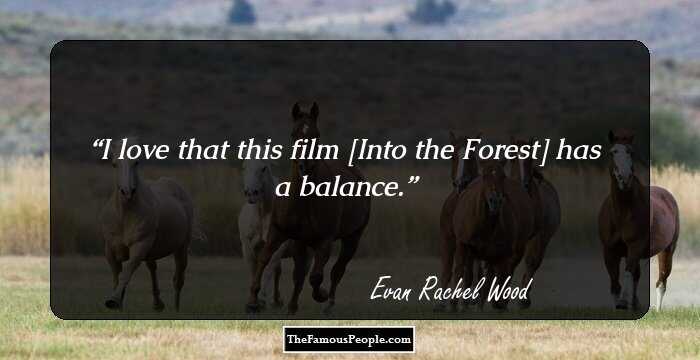 Major Works
Wood’s portrayal of ‘Tracy Freeland’ in ‘Thirteen’ won her nominations for ‘Best Actress’ at the ‘Golden Globe Awards’ and ‘Screen Actors Guild Awards.’
Continue Reading Below
In ‘Pretty Persuasion,’ she played ‘Kimberly Joyce,’ a crafty and sexually precocious high school student. The movie was nominated for the 2005 ‘Grand Jury Prize’ at ‘Sundance Film Festival.’
‘Across the Universe’ saw her play ‘Lucy.’ Shot in Liverpool, New York City, and Vietnam, the movie was nominated for a ‘Golden Globe’ and an ‘Academy Award.’
Her portrayal of ‘Dolores Abernathy’ in the ‘HBO’ science fiction western series ‘Westworld’ was critically acclaimed. The role earned her nominations at ‘Golden Globes’ and ‘Primetime Emmy Awards.’
Awards & Achievements
In 2006, Wood played ‘Natalie Finch’ in the Golden Globe-nominated Augusten Burrough’s biopic ‘Running with Scissors.’ She was awarded the ‘Cannes Film Festival Chopard Trophy for Female Revelation’ for her performance.
She voiced the character of ‘Mala’ in the 2007 sci-fi animation film ‘Battle for Terra.’ At the 2008 ‘Ottawa International Animation Festival,’ the film was honored with the ‘Grand Prize.’ Wood won a ‘Midnight Award’ at ‘San Francisco International Film Festival.’
In 2016, she won the ‘Critics’ Choice Television Award’ for ‘Best Actress in a Drama Series’ for her role in the TV series ‘Westworld.’ 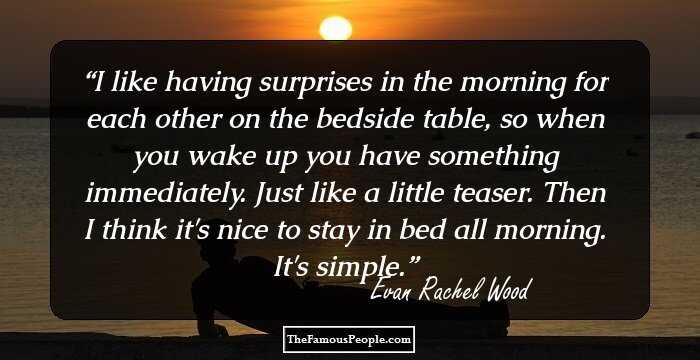 Personal Life & Legacy
Wood met British actor Jamie Bell at ‘Sundance Film Festival’ in 2005, and started dating him. However, they ended their relationship a year later.
From 2007 to 2010, Wood had an on-again, off-again relationship with Marilyn Manson. After a brief breakup, they re-united and got engaged. However, they decided to break their engagement.
In 2011, Wood and Jamie Bell got back together and got married the following year. On July 29, 2013, Wood and Bell were blessed with a son. The couple announced on May 2014 that they had separated.
She was engaged to her ‘Rebel’ and ‘Basketcase’ bandmate Zach Villa from January 2017 to September 2017.
Trivia
This actor’s ex-boyfriend Marilyn Manson painted portraits of her, and exhibited them at the ‘Celebritarian Corporation Gallery of Fine Art.’ She was his inspiration for the song ‘Heart-Shaped Glasses.’
She was inspired by the documentary ‘The Business of Being Born,’ so much so that she opted for a ‘home birth’ while giving birth to her son. She then thanked Ricki Lake, the creator of ‘The Business of Being Born.’