Emperor Jimmu, or Jinmu-Tennō, was the first emperor of Japan and the founder of the ‘Imperial House of Japan.’ It seems he lived in the Yayoi Period, Japan’s “Iron Age.” It is said that his reign began in 660 BC and that he was the descendant of the sun goddess Amaterasu-ōmikami, through her grandson Ninigi-no-Mikoto, and also a descendant of the storm god Susanoo. His main accomplishment was the military campaign launched from Hyuga near the Seto Inland Sea when he captured Yamato and turned it into his headquarters. February 11 is now a national holiday in Japan and is known as the National Foundation Day, in his memory. It honors the foundation of Japan’s imperial line, which continues to date. Emperor Meiji
Emperors & Kings #172
Historical Personalities #273
DID WE MISS SOMEONE?
CLICK HERE AND TELL US
WE'LL MAKE SURE
THEY'RE HERE A.S.A.P
Quick Facts

Japanese People
Japanese Emperors
Japanese Historical Personalities
Aquarius Male
Childhood & Early Life
It would be difficult to discuss Jimmu’s early years because everything we know about him is mainly based on a legend. If he really existed, he lived at a time when people’s lives were rarely documented. In this particular case, however, his life was recorded in the ‘Kojiki.’ Translated as ‘Records of Ancient Matters,’ ‘Kojiki’ is the oldest chronicle in Japan and an excellent collection of legends, myths, genealogies, and semi-historical accounts. He was also mentioned in the ‘Nihon Shoki,’ or ‘The Chronicles of Japan.’
‘Kojiki’ stated that Jimmu was born on February 13, 711 BC. His full name was Kamu-yamato Iware-biko no Mikoto, or Kamu-Yamato Iware-Biko no Sumeramikoto. He was also mentioned as Wakamikenu no Mikoto, Kamu-yamato Iware-biko hohodemi no Mikoto, and Hikohohodemi.
It seems that the sun goddess Amaterasu had sent her celestial grandson, Ninigi, to govern the earth, and he ended up getting married to a descendant of the storm god Susanoo. Jimmu was, therefore, a connection between the ruling dynasty of Japan and their divine ancestors. However, he is not really worshiped in Japan. In 1890, the ‘Kashihara Shrine’ was established nearby, at the spot where Jimmu was said to have ascended to the throne. The traditional site of Jimmu's grave is near Unebiyama in Kashihara, Nara Prefecture.
You May Like

The Sexiest Men Of 2020, Ranked
Career
The historical era he lived in was named Yayoi, after an area in Bunkyo-ku, in the center of Tokyo. The time before his ascension was the “Age of Gods” according to Japan’s mythology. According to legends, the goddess Amaterasu had a son, Ame no Oshihomimi, who gave her a grandson named Ninigi-no-Mikoto. She sent her grandson to the Japanese islands. There, he met Princess Konohana-Sakuya-hime, married her, and had three sons with her. One of them, Hikohohodemi no Mikoto, married Princess Toyotama-hime, daughter of a Japanese sea god. They had a son, Hikonagisa Takeugaya Fukiaezu no Mikoto, but then abandoned him. He was raised by his mother’s younger sister, Princess Tamayori-hime, who later became his wife. Jimmu was the youngest of their four sons.
Jimmu and his brothers were born in Takachiho, but his brother, Itsuse no Mikoto, was the one to lead the migration to the East. While they were traveling, Itsuse got into a battle and was killed by a local chieftain named Nagasunehiko. Thus, Jimmu had to take over and get everyone to Yamato. Apparently, he received help from a three-legged crow. In Yamato, there was another battle against Nagasunehiko, but they won it. Their victory was a result of Jimmu’s realization that the reason for their previous defeat was that they had battled eastward,. against the sun. Thus, he changed his strategy and battled westward. The other reason they won was the help they got from the supernatural three-legged crow who had assisted them in the campaign. Jimmu killed Nagasunehiko with his favorite weapon, a longbow.
The rest of the clans surrendered after that battle, and Jimmu became the official guardian of the “Sanshu no Jingi,” which came from Amaterasu herself. “Sanshu no Jingi” were the “Three Sacred Treasures of Japan,” consisting of the sword ‘Kusanagi,’ the mirror ‘Yata no Kagami,’ and the jewel ‘Yasakani no Magatama.’ They were the symbols of Japan’s mythological past.
According to legends, while Jimmu was surveying his new domain, a mosquito tried to bite him, but since Jimmu was one with the land by then, a dragonfly appeared and killed the mosquito. To honor this, Jimmu named the new country “Dragonfly Islands” (“Akitsushima”). His coronation as the emperor took place in the Nara prefecture, and it seems he ruled for a long time until he died at age 126. His burial grounds remain unknown, but he was given a posthumous name that meant “divine might” or “god-warrior.”
After his death, his son Suizei ascended to the throne. It seems Jimmu’s legacy was the special connection that held together the emperor, the land, and the people and that was the secret to a long and stable rule. However, that was just a legend. In fact, many historians doubt Jimmu was even a real person. The first ruler of the dynasty who was officially recognized and documented was the 10th emperor, Sujin, who ruled in the 1st century BC.
Emperor Jimmu’s legend was linked to a court sorcerer of the first emperor of China. The sorcerer was called Xu Fu and was given an important mission by the Chinese emperor, who was obsessed with finding the elixir of immortality. Xu Fu was supposed to find a sage named Anqi Sheng, who was believed to be over 1,000 years old. There have been some speculations that the sorcerer landed on an island and became its king. Because their historical periods coincide, many believe Xu Fu and Jimmu are the same person. Most scholars, however, reject that theory, mainly because it would mean that Japan’s first emperor was a Chinese refugee and not a descendant of the gods.
Despite his importance, Emperor Jimmu is not mentioned in many writings, especially in popular culture. However, that is probably because the Japanese people are quite sensitive about their imperial line. Similarly, serious scrutiny would probably not go down too well, since it all originated from a legend.
Family & Personal Life
It seems Emperor Jimmu had a consort named Ahiratsu-hime, with whom he had two sons: Prince Tagishimimi and Prince Kisumimi). He also had a relationship with an empress named Himetataraisuzu-hime, who gave him three sons: Prince Hikoyai, Prince Kamuyaimimi, and Prince Kamununakawamimi.
You May Like

See the events in life of Emperor Jimmu in Chronological Order 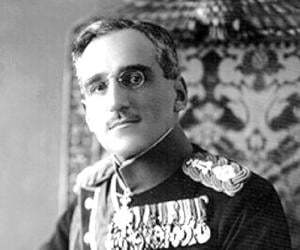 Alexander I of Yugoslavia
(Serbian)