Advanced Search
Elizabeth Warren is an American politician who is serving as United States Senator, representing Massachusetts since 2013. Warren had earned her reputation even before her entry into the Senate. She was a Harvard law professor and the country’s leading bankruptcy expert. A reputed law scholar, Warren has several publications to her name and is among the most quoted academicians under bankruptcy law. She served as chair of Congressional Oversight Panel and was subsequently assigned as Assistant to the President. In the aftermath of the financial collapse in 2008, she served as an advisor to the Obama administration and worked relentlessly to build the government agency Consumer Financial Protection Bureau. This was created for consumers who needed an official body to avoid diabolic lending schemes. With her expanding presence in public and constant effort to build better policies, she made it to the Time’s 100 Most Influential list. Her popularity pushed her to contest for the Senate and she won the general election, becoming the first female senator from Massachusetts. As an academician, she has several articles and bestselling books to her credit. She was honored with the Leila J. Robinson Award by the Massachusetts Women's Bar Association as well. Recently, she declared her intention to run for the office of the President of the U.S as the Democratic Party candidate. American People
American Women
Rutgers University
University Of Houston
Cancer Leaders
Childhood & Early Life
Elizabeth Warren was born as Elizabeth Ann Herring, on June 22, 1949 in Oklahoma, to Pauline and Donald Jones Herring. She is the fourth child of her parents and has three older brothers. Her family raised her as a Methodist. They lived in Norman before moving to Oklahoma City.
Her father suffered from a heart attack, and was under severe debt. Her mother started working as a saleswoman in a department store to earn for the family. Elizabeth started waiting tables at the age of 13 to assist her family.
She attended the Northwest Classen High School; her debating skills fetched her a scholarship to George Washington University. However, she left the university to marry her high school boyfriend and move to Houston.
She enrolled at the University of Houston and graduated in 1970 with a degree in Science specializing in speech pathology and audiology. The couple would move to New Jersey after her husband’s transfer.
She enrolled at Rutgers University to study law; she worked for Cadwalader, Wickersham & Taft as an associate and later graduated in 1976. She also passed the bar examination, earn her J.D. and started working from home as she was pregnant. 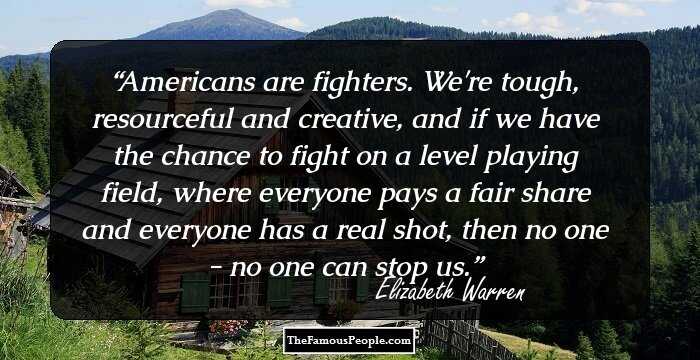 Continue Reading Below
Career
Elizabeth Warren began her academic career at Rutgers University and was a lecturer there from 1977 to 1978. She later shifted to University of Houston Law Center, where she assumed the role of Associate Dean of Academic Affairs. She worked here from 1978 to 1983. She later taught at University of Texas School of Law from 1983 to 1987.
In 1987, she joined the University of Pennsylvania Law School and became William A Schnader Professor of Commercial Law.
She taught at Harvard Law School in 1992 as a visiting professor. She joined Harvard Law School as Leo Gottileb Professor of Law, in 1995. Her specialization is in commercial law and bankruptcy. For the same reason, she was asked to advise the National Bankruptcy Review Commission in 1995.
She was a member of the FDIC Advisory Committee on Economic Inclusion from 2006 to 2010. She was also the member of the National Bankruptcy Conference and American Academy of Arts and Sciences. Her expertise also earned her the coveted vice president position for the American Law Institute.
Her scholarship and discipline bore fruit when she was appointed by Harry Reid to lead a Congressional Oversight Panel to review the implementation of the Emergency Economic Stabilization Act, in 2008.
In 2010, she was named Assistant to the President and Special Advisor to the Secretary of the Treasury on the Consumer Financial Protection Bureau and was asked to establish an advocacy agency, resulting in the Consumer Financial Protection Bureau, in 2011.
Elizabeth Warren is the author of several academic articles, articles for digital and print media, and has penned over ten books. She and her daughter, Amelia Tyagi, wrote the famous ‘The Two-Income Trap: Why Middle-Class Mothers and Fathers Are Going Broke’, in 2003; her other books include ‘A Fighting Chance’ (2014) and ‘This Fight is Our Fight’ (2017).
Her study on bankruptcy and medical fees along with David Himmelstein in 2005 remains one of the most cited studies across policy debates. Her current fame as a Senator has only boosted her reputation over the last couple of years. 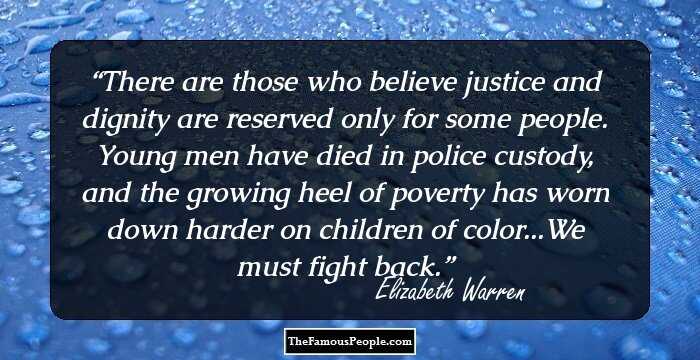 Quotes: Children, Believe
Continue Reading Below
Politics
Warren confessed that she voted for the Republic party and supported them for many years until 1995, when she switched to favoring the Democrats. She has maintained that she votes for both parties and believes no single party should remain in power for long.
In 2011, she declared that she wanted to contest in the 2012 Massachusetts election for the U.S. Senate against the republican Scott Brown. She defeated Scott Brown and became the first woman elected to the U.S. Senate from Massachusetts.
In 2012, she was assigned a chair on the Senate Banking Committee; she was sworn into the committee by Joe Biden in January 2013. Her position allowed her to repeatedly question banks and banking regulators. These videos became an internet sensation in no time.
In 2013, she wrote to the Justice Department, the Federal Reserve, and Securities and Exchange Commission about their obvious bias in ignorance violations by major banks. She introduced the Bank of Student Loans Fairness Act, which allowed a lower rate of interest for students borrowing money. Her foresight was commended by Bernie Sanders.
Her constant public presence and her popularity gave rise to the speculation that she was a possible candidate for the presidential election in 2016. However, Warren denied these rumors and stated her support for the presidential candidate Hilary Clinton.
She, alongside John McCain, Angus King, and Maria Cantwell, reintroduced the Glass-Steagall Act, which provided relief to the taxpayers.
In 2017, she introduced the Presidential Conflicts of Interest Act to address Trump’s vested interest in relation to his business. This was read out in the Senate. Since her term was nearing an end, many were curious if she would run as a candidate again. In 2018, she wrote an email to her supporters that she intended on running for a second term as U.S. Senator.
On January 1, 2019, she announced that she would be running for the office of the President of the USA as the candidate of the Democratic Party.
Awards & Achievements
Elizabeth Warren was named the Bostonian of the Year in 2009; she was also awarded the Leila J. Robinson award in the same year by the Women’s Bar Association of Massachusetts.
She was named among the 100 Most Influential People in the World by Time Magazine in 2009, 2010, and 2015. She has been included in the Oklahoma Hall of Fame as well. 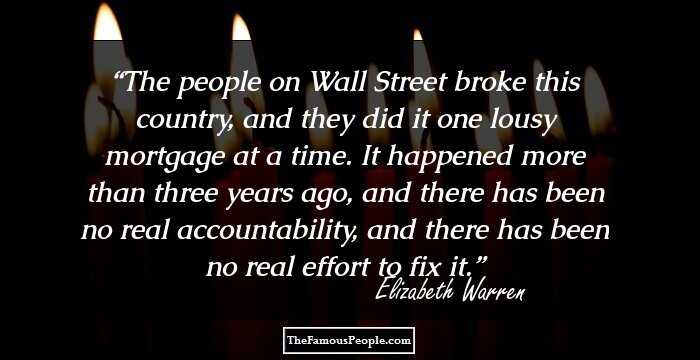 Family & Personal Life
Elizabeth married Jim Warren, who is a computer engineer and NASA mathematician. She met him during college, in 1968. The couple has two children: Amelia and Alexander. She divorced him in 1978 after meeting Bruce Mann, a Harvard law professor.
She married Bruce Mann in 1980 after two years of courting. They currently live in Cambridge, Massachusetts.

Quotes By Elizabeth Warren | Quote Of The Day | Top 100 Quotes

See the events in life of Elizabeth Warren in Chronological Order 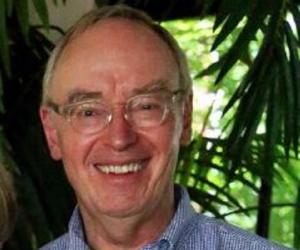