Advanced Search
Duane Lee "Dog" Chapman Sr. is a reality television personality, bounty hunter, and retired bail bondsman from America. He is better known by the moniker “Dog the Bounty Hunter” or simply Dog. He garnered international notoriety when he successfully apprehended Max Factor heir Andrew Luster in Mexico in 2003. A year later, he landed the reality television series, ‘Dog the Bounty Hunter’, on A&E. After the show was cancelled in 2012, Chapman, his wife and business partner Beth Chapman, and other members of his family starred in the spinoff series, ‘Dog and Beth: On the Hunt', on CMT. Another similarly formatted show, ‘Dog's Most Wanted’, is set to debut on WGN America in 2020. Chapman is originally from Colorado but presently resides in Hawaii. In his youth, he was incarcerated for 18 months in a Texas prison after he was convicted of first-degree murder. According to Chapman, he first became interested in a bounty-hunting career during this period. Image Credit
https://www.youtube.com/watch?v=qmqsubEMGxA
(Look Up Lift Up)
Previous   Next 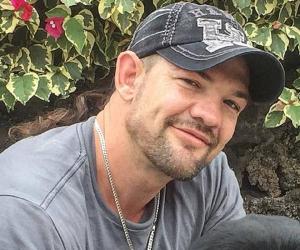 American People
American Men
Male Media Personalities
American Media Personalities
Male Reality TV Personalities
Childhood & Early Life
Born on February 2, 1953, in Denver, Colorado, USA, Chapman is the son of Wesley Duane and Barbara Darlene Chapman (née Cowell). His father was a bail bondsman who worked for the Aaron Bail Bonds. Before that, he served in the US Navy aboard the USS Irwin during the Korean War. Chapman’s mother, Barbara, served as an Assemblies of God minister. He grew up with one brother, Michael, and two sisters, Jolene and Paula.
When he was 16 years old, he became a member of an outlaw motorcycle club named Devils Disciples, and left home. In 1976, he was sentenced to five years in prison after he was convicted of first-degree murder. He subsequently spent 18 months at Texas State Penitentiary in Huntsville, Texas before he was released on parole in January 1979.
Continue Reading Below
Catching Andrew Luster
By the early 2000s, Duane Chapman owned a thriving bail bonds company, Da Kine Bail Bonds, where he worked with several members of his family, his wife Beth, son Leland, and daughter Lyssa.
In 2003, accompanied by Leland and associate Tim Chapman, Duane travelled to Mexico to capture convicted rapist Andrew Luster, who had fled the US during his trial for drugging and raping multiple women and was found guilty in absentia on 86 counts. They found him in Puerto Vallarta and apprehended him.
On their way back to California, all four of them were arrested by the Mexican authorities. After they confirmed Luster’s identity, he was deported back to California to start serving his 125-year sentence.
The Chapmans, on the other hand, were kept in Mexico and were not initially granted bail. Beth, who was in US, attracted media attention to their ordeal. The Chapmans were subsequently granted bail and quickly left the country on the advice of their lawyer.
Bounty hunting is not legal in Mexico, and the Chapmans had become bail jumpers. They were arrested by federal marshals and kept in a prison in Honolulu on the behalf of the Mexican government, who had brought the charges of “deprivation of liberty” against them. Amidst significant media coverage, the case was tried in a Honolulu courtroom, and all charges against the Chapmans were ultimately dropped.
Entertainment Career
Because of Luster’s capture and the trial, the Chapman family had become international celebrities almost overnight. Duane made an appearance in the TV series ‘Take This Job’ before starring in A&E’s ‘Dog the Bounty Hunter’ (2004-12) along with his family.
Following the cancellation of ‘Dog the Bounty Hunter’, Chapman, Beth, and their family appeared in its spinoff, ‘Dog and Beth: On the Hunt’, which aired for three seasons on CMT between April 21, 2013, to August 22, 2015. WGN America is producing Chapman’s upcoming show, ‘Dog's Most Wanted’.
Chapman published his autobiography, ‘You Can Run But You Can't Hide’, in 2007. In 2010, he put out his second book, ‘Where Mercy Is Shown, Mercy Is Given’.
Family & Personal Life
Duane Chapman has been married five times in his life and has 11 biological children and one adopted daughter. With his first wife La Fonda Sue Darnell (née Honeycutt) (married 1972-77), he has two sons, Duane Lee Chapman, II and Leland. His second wife was Anne Tegnell (married 1979-1982), and they had three sons together, late Zebediah Duane Chapman, Wesley, and James.
He married his third wife, Lyssa Rae Brittain (née Greene), in 1982 and divorced her in 1991. He has three children with her as well, Barbara, Tucker, and Lyssa. Chapman and his fourth wife, Tawny Marie Gillespie, were married from 1991 to 2003 and do not have any children together.
Chapman exchanged wedding vows with Alice Elizabeth "Beth" Barmore (née Smith) on May 20, 2006. They were married until her death on June 26, 2019. Their daughter, Bonnie, was born in 1998. The couple welcomed their son, Garry, in 2001. Chapman also adopted Beth’s daughter from her previous marriage, Cecily Barmore-Chapman.
Chapman’s oldest child, Christopher Michael Hecht, was born out of wedlock to his former girlfriend Debbie White in July 1969.
In 2007, Chapman drew much criticism when a private phone conservation between him and his son Tucker was made public. He was heard saying an extremely derogative word multiple times during the conversation, referring to Tucker’s black girlfriend. Chapman later released a public apology.

See the events in life of Duane Chapman in Chronological Order