(One of the Biggest Film Stars of Golden Age of Hollywood )

Advanced Search
Doris Day was an American actress, singer and renowned animal rights activist. Best known for her performance in the romantic comedy, ‘Pillow Talk’ which earned her an Academy Award nomination for the Best Actress in a Leading Role, she was one of the most popular actresses in the 1950s and 1960s. Also a talented singer, she began her career in show business as a singer and became popular following the release of her first hit recording ‘Sentimental Journey’. In a singing career that spanned two decades, she made more than 650 recordings, cementing her reputation as one of the most successful female singers of her era. Impressed by her singing talents and her natural flair for the performance arts, songwriters Jule Styne and Sammy Cahn requested her to audition for film roles to which she agreed. This led to her first movie, ‘Romance on the High Seas’, which introduced a hitherto unknown side of her persona to her fans who were delighted to watch their favorite singer in a starring role in a movie. Blessed with flawless beauty and a charming personality in addition to her golden voice, Doris Day soon became a much sought after Hollywood star. An animal lover from the very beginning, she was also actively involved in animal rights causes and animal welfare Kanye West
3rd April In History
DID WE MISS SOMEONE?
CLICK HERE AND TELL US
WE'LL MAKE SURE
THEY'RE HERE A.S.A.P
Quick Facts

American Celebrities
Actresses
Animal Rights Activists
American Women
Ohio Actresses
Childhood & Early Life
She was born as Doris Mary Ann Kappelhoff in Cincinnati, Ohio, on 3 April, 1924. Her mother Alma Sophia was a housewife while her father Wilhelm von Kappelhoff was a music teacher and choir master. She had two older brothers.
Her parents separated while she was still a little girl, and she lived with her mother. Doris was interested in music and dance from a young age and formed a dance duo with Jerry Doherty in the mid-1930s.
She badly injured her legs in a tragic car accident in 1937 which made it impossible for her to follow her ambition of becoming a professional dancer. While recovering she listened to a lot of songs on radio and while singing along with them, she realized that she was blessed with a good voice. Her mother too recognized her potential as a singer and arranged for her to receive lessons from vocal coach Grace Raine. 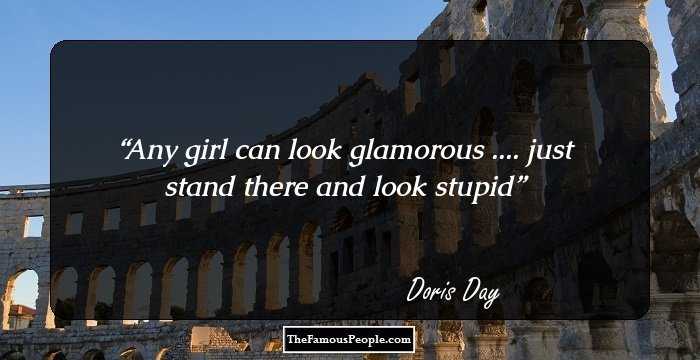 Continue Reading Below
Career
Doris Day began her professional career as a vocalist on the WLW radio program ‘Carlin's Carnival’. Her radio performances attracted the attention of Barney Rapp, who was looking for a girl vocalist and appointed her.
She adopted the stage name Doris Day in 1939 while working for Rapp. She later on worked with Les Brown and released the song ‘Sentimental Journey’ in 1945 which became very popular and established her career as a successful singer.
She performed many songs with Brown’s band, and became a much-loved voice by the late 1940s. In 1947, she met the composer Jule Styne and his partner Sammy Cahn, who asked her to audition for a role in the film ‘Romance on the High Seas’.
The movie ‘Romance on the High Seas’ (1948) not only marked her debut as a film actress, but also provided her with her first No. 1 hit recording as a soloist, ‘It's Magic’. By the early 1950s, she became one of America’s most sought-after actresses and singers, and was a darling of the masses.
Doris Day co-starred with James Cagney in the 1955 biographical film, ‘Love Me or Leave Me’, which was based on the life story of Ruth Etting, a singer who rose from dancer to movie star. The film garnered critical and commercial success, becoming Doris Day's biggest hit so far.
She gave one of her most memorable performances as an actress in 1959 when she starred in the movie ‘Pillow Talk’, co-starring Rock Hudson and Tony Randall. She went on to star in two more films with Hudson and Randall, ‘Lover Come Back’ (1961) and ’Send Me No Flowers’ (1964).
Her success streak continued throughout the 1960s and she appeared in several hit films such as ‘The Ballad of Josie’ (1967), ‘Where Were You When the Lights Went Out?’ (1968), and ‘With Six You Get Eggroll’ (1968). She decided to retire from films in 1968.
Her third husband died in April 1968 and Doris Day discovered that he along with his business partner had squandered her earnings, leaving her deeply in debt. Thus she had to continue working and started appearing in the television series, ‘The Doris Day Show’ even though she hated the idea of working on television.
The first episode of ‘The Doris Day Show’ aired in September 1968, and the show became very successful. It ran for five seasons till 1973. She largely retired from acting after ‘The Doris Day Show’, though she continued to make sporadic appearances on television.
Continue Reading Below 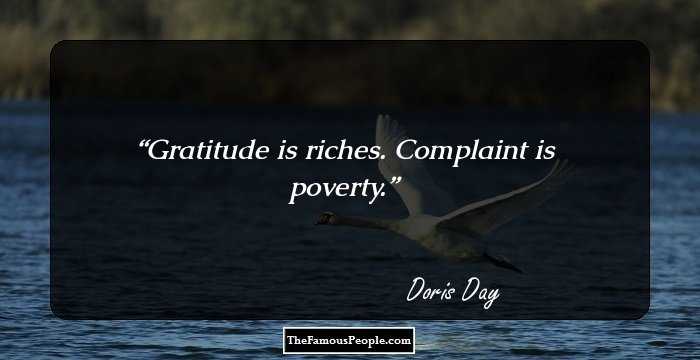 Major Works
Her portrayal of Jan Morrow in the romantic comedy, ‘Pillow Talk’, is undoubtedly one of her finest performances. She played the role of a successful interior decorator who shares a multiparty telephone line with a Broadway composer and playboy which gives rise to hilarious situations. The role earned her several awards and nominations.
Awards & Achievements
In 2004, she was awarded the Presidential Medal of Freedom by President George W. Bush for her achievements in the entertainment industry.
She received a Grammy for Lifetime Achievement in Music in 2008, and is the recipient of three Grammy Hall of Fame Awards (1998, 1999 and 2012).
In January 2012, the Los Angeles Film Critics Association presented Doris Day with a Lifetime Achievement Award. 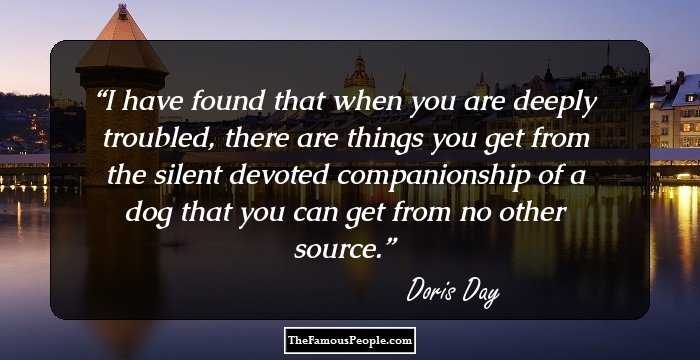 Quotes: You, I
Personal Life & Legacy
Doris Day married Al Jorden, a trombonist, in 1941. This marriage resulted in the birth of her only child, a son named Terry. Her husband was physically abusive, and thus she divorced him in 1943.
She married a saxophonist, George Weidler, in 1946. This union too was short-lived and ended in 1949.
Her third marriage was to Martin Melcher in 1951. Melcher adopted her son, and produced many of Doris Day’s movies. This marriage lasted for 17 years until Melcher's death in 1968.
She tied the knot once again in 1976, entering into wedlock with Barry Comden. However, this marriage soon unraveled and the couple divorced in 1981.
Doris Day was in excellent health till her last days. A few days before her death, she contracted a serious case of pneumonia and died on 13 May 2019, at the age of 97, at her Carmel Valley home in California.
Trivia
Doris Day was also involved in animal welfare activities. In 1971, she co-founded Actors and Others for Animals, and later founded the Doris Day Animal Foundation and the Doris Day Animal League (DDAL). The DDAL merged into The Humane Society of the United States in 2006.

See the events in life of Doris Day in Chronological Order