Advanced Search
Donna Douglas was an American actor and singer, best known for her performance as ‘Elly May Clampett’ in 'The Beverly Hillbillies' (1962–1971), one of the greatest sitcoms of all time. She started as a model and won a couple of beauty pageants, too. Donna then appeared on a couple of variety shows, eventually earning the breakthrough role of ‘Elly.’ Despite appearing in numerous TV productions in the 1960s, Donna was still relatively unknown when she auditioned for 'Hillbillies.' However, apart from 'Hillbillies,' Donna had had no other significant project in her career. She did have a lead role in the Elvis Presley-starrer 'Frankie and Johnny,' but it went unnoticed. Following her long stint in 'Hillbillies,' Donna became a real-estate agent and then a gospel singer. She had also been a prominent inspirational speaker and had authored a few books for children and adults.

American Celebrities
Musicians
Gospel Singers
Business People
Lyricists & Songwriters
Childhood & Early Life
Donna was born Doris Ione Smith, on September 26, 1932, in the community of Pride, East Baton Rouge Parish, Louisiana, to Emmett Ratcliff Smith, Sr. and his wife, Elma. She had an older brother named Emmett Ratcliff Smith Jr.
Donna played softball and basketball in high school and was part of the first graduating class of 'St. Gerard Catholic High School.' She then attended 'Redemptorist High School,' Baton Rouge, Louisiana, and graduated in 1951. Later, in 1982, she enrolled at the 'Rhema Bible Training Center' in Broken Arrow, Oklahoma, and graduated in 1984, majoring in children's ministry.
Donna was just 16 when she got married, and by 21, she had a son. Following this, she divorced her husband and began her stint with modeling and acting. Donna was crowned 'Miss Baton Rouge' and 'Miss New Orleans' in 1957.
Donna then moved to New York and began appearing in series. She also worked as a print-ad model for toothpaste advertisements. 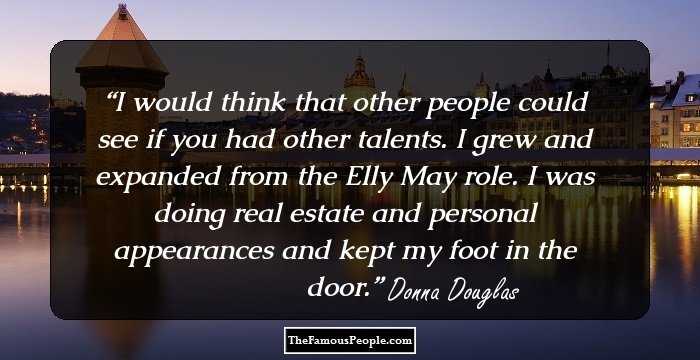 American Women
Louisiana Actresses
Louisiana Musicians
Libra Singers
Career
Donna made her first TV appearance as the "Letters Girl" on 'The Perry Como Show' in 1957 and as the "Billboard Girl" on 'The Steve Allen Show' in 1959. Her appearances on the show caught the attention of New York photographers and newspaper reporters. She was crowned "Miss By-line" on the popular 'CBS' show 'The Ed Sullivan Show.'
Film producer Hal B. Wallis saw Donna on the 'Ed Sullivan Show’ and cast her as ‘Marjorie Burke’ in the drama feature 'Career' (1959). She later played a secretary named ‘Deborah’ in the 'Eastmancolor' romantic comedy 'Lover Come Back' (1961).
In 1959, Donna appeared in her first TV series, as ‘Alice’ in the 'CBS' sitcom 'Bachelor Father.' She also appeared as ‘Joyce Markham’ in the syndicated Western-themed crime drama 'Sheriff of Cochise,' which was renamed ‘United States Marshal’ in the third and fourth seasons.
Donna's first recurring (four episodes) character was ‘Barbara Simmons’ in the 'CBS' detective drama 'Checkmate.' She was part of the 'ABC' series 'Surfside 6' and the 'CBS' sitcom 'Pete and Gladys,' appearing in two episodes each, all aired in 1961.
Donna competed with 500 young actors to earn a role in the 'CBS' sitcom 'The Beverly Hillbillies.' She played ‘Elly May Clampett,’ the beautiful tomboy daughter of ‘Jed' (played by Buddy Ebsen), in nine consecutive seasons (1962–1971).
In the summers of 1966, Donna took a break from 'The Beverly Hillbillies' and played ‘Frankie,’ opposite Elvis Presley, in the musical 'Frankie and Johnny.' Unfortunately, the success of the film did nothing to help Donna's film career.
Donna got her real-estate license after she finished filming 'The Beverly Hillbillies.' However, she did not continue working in that field for long and remained in the entertainment industry instead.
Donna realized that she was being typecast because of her 'Hillbillies' role. Hence, she decided to retire and become a gospel singer. She then started performing and speaking at church groups, youth groups, schools, and colleges all over the country.
Donna returned to acting with the reunion movie 'Return of the Beverly Hillbillies' in 1981. She also guest-appeared in several TV series. Her character, ‘Elly,’ was revived through paper dolls, coloring books, and various toys, while the show flourished.
Continue Reading Below
Apart from 'The Beverly Hillbillies' soundtrack, Donna recorded four Christian albums: 'Donna Douglas Sings Gospel,' 'Donna Douglas Sings Gospel II,' 'Here Come the Critters,' and 'Back on the Mountain.'
In 1993, Donna appeared on Jerry Springer's syndicated tabloid talk show, ‘The Jerry Springer Show,’ and in a 'CBS-TV' TV special named 'The Legend of the Beverly Hillbillies.' On March 31, 1999, she was seen in an episode of the 'CBS' sitcom 'The Nanny,' which was her final TV role. The role of ‘Marjorie’ in 'Chronicles of Life Trials' (2013) was her final film role.
In December 2010, multinational toy manufacturing company 'Mattel, Inc.' released three ‘Barbie’ variants under the 'Classic TV Collection.' One of them was modeled on ‘Elly May Clampett.’
Donna wrote and published 'Donna's Critters & Kids: Children's Stories with a Bible Touch,' and in November 2011, she released the children's book 'Miss Donna's Mulberry Acres Farm.'
In 2013, she released a cookbook named 'Southern Favorites with a Taste of Hollywood,' which had a section on good manners, titled 'Hollywood Social Graces.' 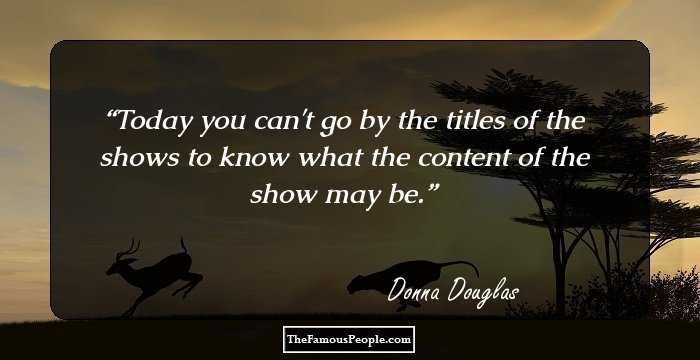 Women Singers
Libra Actresses
Libra Musicians
Women Musicians
Legal Matters
On June 10, 1993, Donna and her 'Associated Artists Entertainment' (AAE) partner Curt Wilson filed a $200 million lawsuit against Whoopi Goldberg and Bette Midler's production house, 'Disney,' and 'Creative Artists Agency,’ accusing them of plagiarizing the screenplay of the 1992 musical comedy 'Sister Act' from an ‘AAE’-owned book named 'A Nun in the Closet.'
In 1994, Donna and Wilson declined a $1 million settlement offer. However, the judgment was passed in favor of 'Disney' and the other accused parties.
On May 4, 2011, Donna filed a federal lawsuit against 'Mattel' and 'CBS Consumer Products,' claiming that they had used her name and fame for their ‘Barbie’ collection without her consent. She demanded $75,000 in damages. The case was settled on December 27, 2011. However, the terms of settlement remain undisclosed.
Continue Reading Below
Recommended Lists:

American Singers
American Musicians
American Actresses
Libra Entrepreneurs
Family, Personal Life & Death
Donna's father, Emmett R. Smith Sr., a retired 'Standard Oil Co.,' died in a boating accident on October 7, 1988, near Port Allen. Her mother was a telephone operator and died on December 31, 2003, at the age of 93 years. The same year, she lost Buddy Ebsen, her friend of 32 years.
Many articles mention Donna's birth name as “Dorothy Smith” and “Doris Smith.”
Donna got married to Roland Bourgeois, Jr. in 1949. They divorced in 1954, the year their son, Danny Bourgeois, was born. Following this, she was married to 'Hillbillies' director Robert M. Leeds from 1971 until their divorce in 1980.
Donna was a self-labeled tomboy in her younger days.
She would receive numerous photos and fan mails daily, more than any other 'Hillbillies' cast member. Donna spent hours autographing those photos and responded personally to each of the fan mails.
Donna was a prominent speaker at various Christian children's homes, mostly in the American South.
She was staunch ‘Republican.’
Donna was diagnosed with pancreatic cancer in August 2014 and died on January 1, 2015, at the 'Baton Rouge General Hospital.' She was cremated in East Feliciana Parish, in Louisiana's ‘Bluff Creek Cemetery.’ 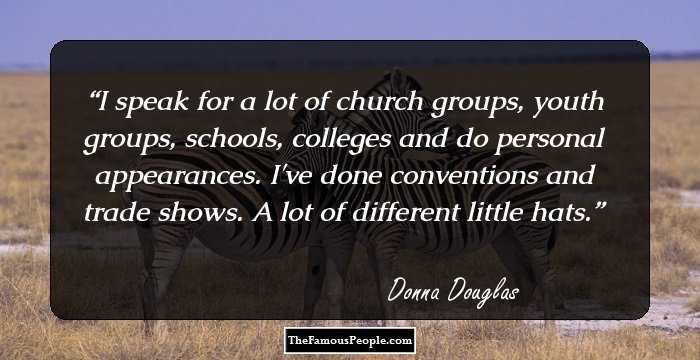 Female Gospel Singers
American Women Singers
American Gospel Singers
American Entrepreneurs
Trivia
Donna was so fond of her character, ‘Elly,’ in 'The Beverly Hillbillies' that she often made public appearances dressed as the character.
During the filming of 'Hillbillies,' Donna and co-star Irene Ryan would host a grand Christmas party annually, for the show's staff and families.
She auditioned for a role in 'Visit to a Small Planet' (1960).
Donna was offered a nighttime soap after she finished 'Hillbillies.' She turned down the offer, as she wanted to be with her family after her long stint on the show. Even though the nighttime show was a big hit, it did not affect Donna in any way, as she had always wanted to do meatier roles, irrespective of their popularity.
Recommended Lists:

Quotes By Donna Douglas | Quote Of The Day | Top 100 Quotes

See the events in life of Donna Douglas in Chronological Order