(American Actress Best Known for Her Films: ‘Hannah and Her Sisters’ and ‘Bullets over Broadway’)

Dianne Evelyn Wiest is an American actor and a two-time ‘Emmy’ and ‘Academy Award’ winner. She is best known for her motherly roles in films, such as ‘Parenthood,’ ‘Edward Scissorhands,’ ‘The Birdcage’ among others. Born and raised in the US, she was a dancer since childhood and studied theater later. She traveled to different places with theater groups. Although Wiest began her career with theater, the gifted actor performs effortlessly across stage, films, and TV. Similarly, she has won accolades for her acting skills in different genres, such as drama and comedy. She is considered as an underrated, yet versatile actor, who can portray a wide range of characters and emotions. Wiest has won prestigious nominations and awards for her performances. She has been part of five Woody Allen-directed films, which offered her strong and varied roles, and did justice to her talent. She was in a relationship with her talent agent, Sam Cohn. Wiest lives with her two adopted daughters. Jamie Lee Curtis
28th March In History
DID WE MISS SOMEONE?
CLICK HERE AND TELL US
WE'LL MAKE SURE
THEY'RE HERE A.S.A.P
Quick Facts

American People
American Women
Missouri Actresses
Aries Actresses
American Actresses
Childhood & Early Life
Dianne Wiest was born on March 2, 1948, in Kansas City, Missouri, US. Her father, Bernard John Wiest, was from Pennsylvania and was the dean of a college. He had earlier served as a psychiatric social-worker for the US army. He was of Croatian and German descent. Wiest’s mother, Anne Steward (née Keddie), was from Fife, Scotland, and worked as a nurse. Dianne’s parents met in Algiers and later got married in Naples. She has two brothers, Greg and Don Wiest.
She attended the ‘Nurnberg American High School.’ As a child, she wished to learn ballet and be a ballerina. However, while in high school, she decided to pursue theater.
She attended the ‘University of Maryland’ and graduated in arts and science in 1969. After her third term at the university, she went touring along with a Shakespearean troupe. 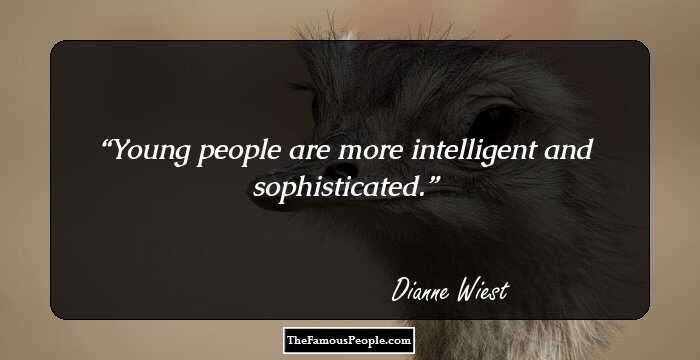 Quotes: Young
Continue Reading Below
Career
Dianne began her acting career in the 1970s with a stage performance. She worked as an understudy in ‘Happy Birthday, Wanda June,’ in 1970.
In 1971, she made her ‘Broadway’ debut in Robert Anderson’s ‘Solitaire.’ She worked for four years with the ‘Arena Stage’ in Washington DC, where she portrayed leading roles in plays such as ‘The Lower Depths’ by Maxim Gorky and ‘Heartbreak House’ by George Bernard Shaw.
Wiest began her TV career in 1975 with the TV movie ‘The Madness of God.’ Around the same time, she traveled to various places in the USSR with the ‘Arena Stage (1976).’ She essayed lead roles in the plays ‘Pirates,’ ‘A History of the American Film’ among others.
Between 1979 and 1980, she received three ‘Off-Broadway’ theater awards for her sterling performance in ‘The Art of Dining.’ This was one of the two plays that she did for Tina Howe, the other being ‘Museum.’
Her first big-screen appearance was in the 1980 film ‘It’s My Turn.’ She then appeared in ‘I’m Dancing as Fast as I Can.’ In the 1980s and the 1990s, she worked in five films directed by Woody Allen, two of which, ‘Hannah and Her Sisters’ (1987) and ‘Bullets over Broadway’ (1995), fetched her ‘Academy Awards’ for the ‘Best Supporting Actress.’
Her well-appreciated film performances and the variety of roles coming her way had an effect on the amount of time she could devote to her stage career. However, she still managed to appear in plays such as ‘Frankenstein’ (1981), directed by Tom Moore; ‘Othello’ (1982), opposite James Earl Jones; and ‘Serenading Louie’ (1984) among others.
In the 1990s, she performed in plays such as ‘The Shawl’ and Naomi Wallace’s ‘One Flea Spare.’ She worked with Al Pacino in Oscar Wilde’s ‘Salome’ in 2003. Of late, she has performed in ‘All My Sons,’ which was a ‘Broadway’ revival of Arthur Miller’s play and featured Patrick Wilson and Katie Holmes.
Wiest won her first ‘Emmy Award’ in 1989, for her excellent work in the TV series ‘Road to Avonlea.’ She was nominated again, in 1999, for her portrayal of a restaurant owner in the telefilm ‘The Simple Life of Noah Dearborn.’ During the 2000s, she worked in a few long-running TV serials. Wiest won her second ‘Emmy Award’ in 2008, for the ‘HBO’ series ‘In Treatment.’
She received her second ‘Academy Award’ nomination for her role of an exasperated single mother in the 1989 Ron Howard film ‘Parenthood.’ Her co-stars in the film were Steve Martin, Keanu Reeves, Jason Robards, and Martha Plimpton. Her other notable movie performances were that of a mother of teenagers victimized by vampires in Joel Schumacher’s ‘The Lost Boys’ (1987), and that of a child psychologist in Jodie Foster’s ‘Little Man Tate’ (1991). Her appearances as a prostitute in ‘The Purple Rose of Cairo’ (1985), as the high-strung ‘Aunt Bea’ in ‘Radio Days’ (1987), and as an unhappy married woman in ‘September’ were also appreciated.
Continue Reading Below
Of late, Wiest has portrayed the role of ‘Winnie’ in Samuel Beckett’s ‘Happy Days,’ for the ‘Yale Repertory Theater,’ in 2016 and has reprised the role for ‘Theater for A New Audience’ in 2017. She worked as a visiting teacher with the first year students at ‘Columbia University,’ on selected plays of Anton Chekhov and Arthur Miller.
Wiest essayed important supporting roles in the movies ‘Don in Real Life’ (2007), and ‘Synecdoche, New York,’ (2008). The 2010 movie ‘Rabbit Hole,’ which premiered at the ‘Toronto International Film Festival,’ had Wiest playing the role of Nicole Kidman’s mother. Her other recent movies are ‘Darling Companion’ (2012), ‘The Humbling’ (2014), ‘Five Nights in Maine’ (2015), and ‘Sisters’ (2015). She appears in a light role in the sitcom ‘Life in Pieces’ (2015–present). 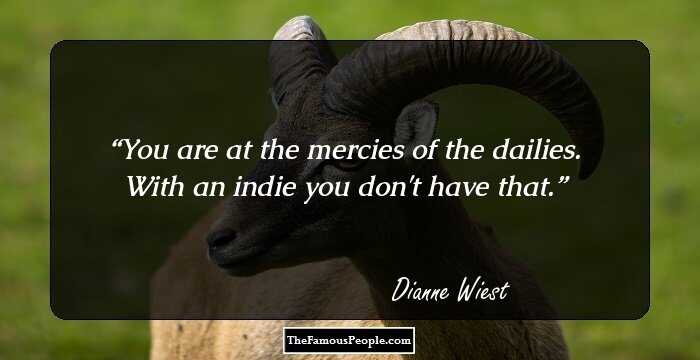 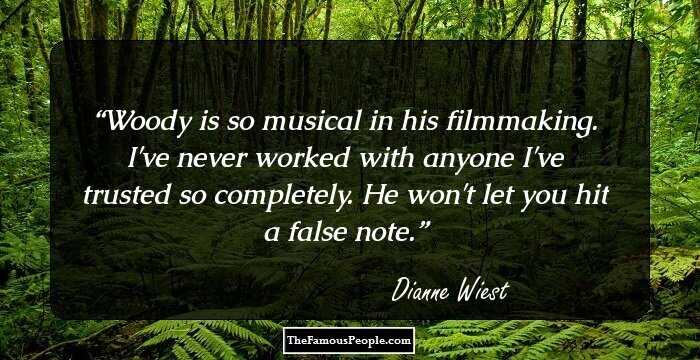 Quotes: Never
Personal Life
Dianne Wiest was in a relationship with her talent agent, Sam Cohn. He died in 2009. Wiest has adopted two daughters, Emily, born in 1987, and Lily, born in 1991.
Trivia
In an interview published in 2015, Wiest explained that she found it difficult to get enough film or TV roles to pay the rent for her New York apartment.
Throughout her long career, she has never been associated with any controversy.

Quotes By Dianne Wiest | Quote Of The Day | Top 100 Quotes

See the events in life of Dianne Wiest in Chronological Order