Dennis Rodman is a former American basketball player. Also know by the nickname ‘The Worm’, Rodman was famous for his rebounding skills and defence techniques. In a career spanning two decades, he played for the ‘Detroit Pistons’, ‘San Antonio Spurs’, ‘Chicago Bulls’, ‘Los Angeles Lakers’, and ‘Dallas Mavericks’. He has bagged ‘NBA All-Defensive First Team’ and ‘NBA Defensive Player of the Year Award’ on multiple occasions. Of the seven consecutive years that Rodman led NBA in rebounds, he won five championships. Basketball fans consider him the best rebounding forward in NBA history. Post his stint in basketball, Rodman tried his hand in wrestling and acting. He made appearances in World Championship Wrestling (WCW) as a member of the nWo. As a wrestler, he won the ‘Celebrity Championship Wrestling’ tournament. Rodman even started his own television talk show titled ‘The Rodman World Tour’ which was known for his unique style of interviewing his guests. He even starred in the Hollywood movies ‘Double Team’ and ‘Simon Sez’. His poor acting skills in ‘Double Team’ won him a triple Razzie Award. He thereafter, appeared in several TV shows of which he won the reality show ‘Celebrity Mole’. Shaquille O’ ...
Basketball Players #16
Sportspersons #85
DID WE MISS SOMEONE?
CLICK HERE AND TELL US
WE'LL MAKE SURE
THEY'RE HERE A.S.A.P
Quick Facts

American People
American Men
Tall Celebrities
Tall Male Celebrities
Male Sportspersons
Childhood & Early Life
Dennis Keith Rodman was born on May 13, 1961, to Shirley and Philander Rodman, Jr. His father worked for the Air Force and even fought the Vietnam War. His father left his family and settled in Philippines.
After Rodman’s father left his family, he grew up with his mother and two sisters, Debra and Kim, in the Oak Cliff section of Dallas. His mother took up several jobs to make ends meet.
Dennis Rodman attended South Oak Cliff High School, where he came in contact with the future Texas A&M basketball coach, Gary Blair. Blair was his gym teacher and coached his sisters Debra and Kim in basketball. His sisters were exceptionally talented while Rodman was considered to be an average athlete. Even though he always made it to the list of the school team he was always on the bench.
Since Rodman measured barely 5 feet 11 inches through his freshman he was not selected for the basketball team and was also dropped from the football team. After school, he worked as a janitor at the Dallas-Fort Worth airport. As puberty hit Rodman, he grew out of his frame to measure 6 feet 7 inches tall.
He then attended Cooke County College in Gainesville, Texas where he joined the basketball team and soon outdid everyone on the basketball court. In the first semester itself, his average was 17.6 points and 13.3 rebounds. However, his poor academic performance forced him to quit college.
He then joined the Southeastern Oklahoma State University and in a span of three years i.e. 1984–1985 and 1985–1986 he became three-time NAIA All-American with an average of over 25 points and nearly 16 rebounds per game.
He even went on to win the ‘Most Valuable Player’ award at the Portsmouth Invitational Tournament which is seen as a pre-draft camp for those pursuing basketball professionally. 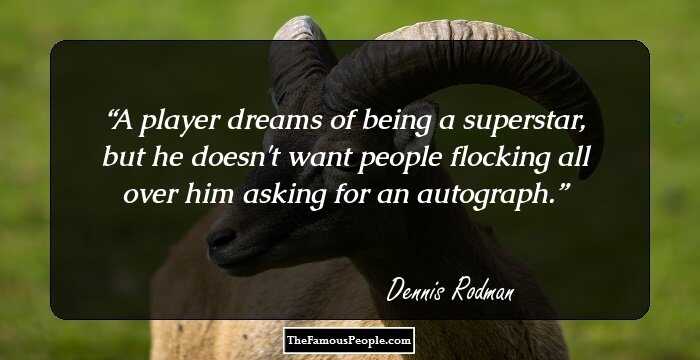 Famous Beautiful Women With Green Eyes
Career
Dennis Rodman was drafted by the Detroit Pistons in 1986. Detroit Pistons won 52 games to make place for themselves the 1987 NBA Playoffs.
In the next season 1987-88, Rodman played consistently well registering an average of 11.6 points and 8.7 rebounds. The Pistons reached the finals of the 1988 NBA but lost to Los Angeles Lakers.
He was on the bench for the next season through 1988-89 averaging 9.0 points and 9.4 rebounds in 27 minutes. The Pistons eventually reached the finals and beat Lakers. Rodman battled back spasms to put up a tough defence with 19 rebounds.
Piston won the championship for two consecutive years and Rodman became one of the main players to have contributed to the clubs’ victories. His strong defense and exemplary rounding skills earned him a spot in the 1990 NBA All-Star team. He was also nominated for ‘Defensive Player of the Year’ award. In 1992, he won the first of the seven consecutive rebounding crowns.
In 1993, the coach of Pistons, Chuck Daly, whom Rodman looked up to as a father, resigned after which Rodman’s relationship with the club’s management got strained. Despite having a few more years in his contract, Rodman decided to leave the club and was traded to the San Antonio Spurs.
In this new club, Rodman played as a power forward. While in San Antonio Spurs, Rodman shaved his head and then dyed it blonde and sported different other colours over time. During this time, he was embroiled in multiple controversies owing to his unruly behaviour. He gained popularity after making public his short two-month affair with singer Madonna.
In the 1994-95 season, Rodman was suspended twice because of his scuffle with the club’s front office. He finally returned to the game after missing 19 games.
In 1995-96 season, Rodman was once again traded and this time he joined the Chicago Bulls as a power forward. This club already boasted of popular players, such as Michael Jordan and Scottie Pippen.
In spite of struggling with calf problems, Rodman played his ace game by snatching more than 20 rebounds 11 times. He scored his first triple-double against the Philadelphia 76ers with 10 points. During this season, Rodman found himself in another controversy after head-butting referee, Ted Bernhardt, during a game. He was fined $20,000 and was suspended for six games.
Continue Reading Below
During his tenure with the Chicago Bulls, he won multiple rebounding titles and then went on to join Los Angeles Lakers for a brief period before retiring with the Dallas Mavericks.
After a long hiatus from the game, Rodman made several attempts at returning to basketball but could not repeat any of his on-field success and was eventually inducted into the NBA Hall of Fame in 2011.
During his break from basketball, Rodman explored wrestling and entertainment and joined his friend, Hulk Hogan, in WCW Nitro on March 10, 1997. At another event, he made another appearance as a member of the nWo. In 2008, he once again tried a hand at wrestling by participating in Hulk Hogan’s Celebrity Championship Wrestling which he won.
In 1996, he started his own talk show, ‘The Rodman World Tour’ which aired on MTV. The show was known for his quirky way of interviewing his guests.
In 1997, he featured in his own debut film ‘Double Team’ which also starred Jean-Claude Van Damme and Mickey Rourke. The film was heavily criticised and so was Rodman’s pathetic acting. However, the negative reception did not deter him from starring in another action film titled ‘Simon Sez’ in 1999.
He participated in several reality TV shows such as UK’s ‘Celebrity Big Brother’, ‘Love Island’, and ‘Celebrity Apprentice’.
He released his autobiography ‘Bad As I Wanna Be’ in 1996 and famously strutted in a wedding dress to promote his book. He stated that he was bi-sexual and was going to marry himself. It was later revealed that he had received $10 million from the designer to wear the dress.
In 2013, Rodman headed to North Korea with Vice Media correspondent, Ryan Duffy, to hold a basketball exhibition. He and his team were the first Americans to have ever met North Korean leader, Kim Jong-un. On his return, he stated that Kim was his "a friend for life".
In 2017, he found himself in yet another controversy after the media lambasted his intentions for visiting North Korea. A popular newspaper questioned if President Donald Trump had sent Rodman to put in a request to release American prisoners or start another way for diplomatic communications. Rodman vehemently denied the accusations and government’s involvement in his visit. 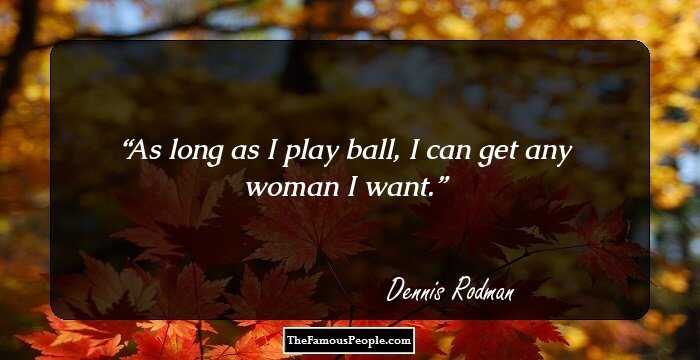 Personal Life & Legacy
Rodman was briefly married to his first wife Annie Bakes with whom he has a daughter named Alexis, born in 1988. The couple separated in the early 1990’s.
He then married model and actress Carmen Electra in November 1998 in Las Vegas. However, Electra filed for divorce the following year.
He met his next wife Michelle Moyer in 1999. The couple have two kids, a son named Dennis Junior who was born the very next year and a daughter Trinity, born in 2001. Rodman and Moyer finally got married in 2003. This marriage too could not sustain for long as Moyer filed for divorce in 2004. The couple tried to reconcile several times but the marriage eventually dissolved in 2012 after Moyer re-filed for divorce.

Quotes By Dennis Rodman | Quote Of The Day | Top 100 Quotes

See the events in life of Dennis Rodman in Chronological Order