(Actress & Television Personality Known for Her Films: 'Starship Troopers' & 'Bond Girl' in 'The World Is Not Enough')

Denise Lee Richards is an American actress and a former fashion model. She is known for starring in the reality TV show ‘Denise Richards: It's Complicated’ and for playing the role of Debra Simon in the comedy series ‘Mountain State’. She is also known for appearing in several movies, such as ‘The World Is Not Enough’, ‘Wild Things’, 'Starship Troopers' and 'Love Actually', to name a few. Born in Downers Grove, Illinois, to a telephone engineer father and a coffee shop owner mother, Richards grew up in Downers Grove and Mokena alongside her younger sister Michelle. She was educated at El Camino High School and Downers Grove North High School. After her high school graduation, she started working as a model and travelled to famous cities such as Paris, Tokyo, and New York to do photo shoots and commercials. Eventually, she ventured into acting as well. An avid animal lover, Richards has been associated with a number of organizations that work for the welfare of animals. She is also totally devoted to her own dogs and cats who she has been raising from a long time. The blonde-haired actress is also a supporter of same-sex marriage. Once married to actor Charlie Sheen, she is the mother of three daughters. American People
American Women
Illinois Actresses
Aquarius Actresses
American Actresses
Childhood & Early Life
Denise Lee Richards was born on February 17, 1971 in Downers Grove, Illinois, the USA. Her father Irv Richards served as a telephone engineer and her mother Joni owned a coffee shop. She has one younger sister, Michelle.
Richards grew up in Mokena and Downers Grove. She studied at Herrick Junior High School and at Downers Grove North High School. At the age of 15, she moved to Oceanside, California, with her family and attended El Camino High School.
After her high school graduation, Richards started modelling, travelling to many cities such as Tokyo, Paris, and New York for her assignments. She ventured into acting as well and first appeared in the music video for the song ‘The Captain of Her Heart’ (U.S. version).
Continue Reading Below
Career
Denise Richards spent the early 1990s doing low-budget TV shows and films, such as ‘Saved by the Bell’ and 'Loaded Weapon 1,' and guest starring in episodes of numerous television programs, such as 'Eerie, Indiana', ‘Married... with Children’, ‘Beverly Hills, 90210’ and ‘Melrose Place’, to name a few.
In 1997, she got her first starring role when she appeared as Carmen Ibanez in the sci-fi action film ‘Starship Troopers.’ The film was a hit and the actress’ performance was much appreciated. Soon after, Richards had a role in the erotic thriller ‘Wild Things’. She was then featured in the music video for “Canadian Rose” by Blues Traveler in 1998.
She was cast in the role of a nuclear physicist named Christmas Jones in the movie ‘The World Is Not Enough’ in 1999. Though she believed her role to be "brainy" and "athletic", she was eventually criticized for not being credible in the role.
The American beauty then appeared alongside Kirsten Dunst in the 1999 comedy ‘Drop Dead Gorgeous’. She played a spoiled princess in the flick and her performance was highly appreciated.
In the early 2000s, she got featured in a number of films, including ‘Good Advice’, ‘Empire’, ‘The Third Wheel’, ‘You Stupid Man’, ‘Scary Movie 3’ and ‘Whore’, to name a few. During this time, Richards also appeared in an episode of ‘Friends’, in two episodes of ‘Two and a Half Men’ and four episodes of ‘Spin City’.
She starred in the UPN series ‘Sex, Love & Secrets’ in 2005 and also appeared in the ensemble drama ‘Edmond’ the same year. In July 2006, she posed semi-nude for ‘Jane’ magazine in order to raise money for a charity.
In 2008, the actress began starring in the reality show ‘Denise Richards: It's Complicated’. She was also the executive producer for the show. During this time, she also participated as a contestant in ‘Dancing with the Stars’. She did the films ‘Blonde and Blonder’, ‘Jolene’, ‘Finding Bliss’ and ‘Deep in the Valley’ as well.
Richards played Debra Simon in the comedy series ‘Blue Mountain State’ in 2010-11. In 2012, she starred in the movies ‘Madea's Witness Protection’ and ‘Freeloaders’. That year, she also appeared as herself in two episodes of ‘30 Rock’.
The actress joined the cast of the drama series ‘Twisted’ as Karen Desai in 2013. The series ran until 2014. While working in the drama, Richards also did the television film ‘Fatal Acquittal’.
Continue Reading Below
She played Marion Bellerose in the TV program ‘Vanity’ in 2015. In 2017, she starred as Dr. Amanda Tyler in the drama film ‘American Violence’. That year, she also played Kat Faust in the movie ‘American Satan.’
Richards will be seen in the upcoming movie ‘The Toybox,’ scheduled for a late 2018 release. In this supernatural horror, she will be playing the role of Jennifer, who gets captured by a supernatural force along with her family.
Major Works
In 2003, Denise Richards played Carla in ‘Love Actually’. This Christmas-themed romantic comedy flick directed by Richard Curtis featured an ensemble cast, many of who had worked with Richards in past TV and film projects. The film was a box-office success and it managed to gross about $247 million worldwide. Richards, as part of the film’s ensemble cast, was nominated for Phoenix Film Critics Society Award under the category ‘Best Ensemble Acting’.
Personal Life
Denise Richards first met actor Charlie Sheen in 1991. The couple became engaged in December 2001 and married the following year. They have two daughters: Sam J. Sheen and Lola Rose Sheen.
In 2005, Richards filed for divorce from her husband. She briefly reconciled with him. However, a year later, it was reported that she was continuing with the divorce. The reason behind the divorce was not disclosed. The actress later sought a restraining order against her ex-husband, alleging death threats against her. In November 2006, their divorce became final.
In June 2011, she adopted a third daughter as a single parent and named her Eloise Joni Richards after her mother who had died from cancer in the year 2007.
By mid-2012, Richards and her ex-husband Sheen were on good terms. The following year, she was awarded temporary custody of Max and Bob, the twin sons of Sheen and his third wife Brooke Mueller, after the kids were taken from Mueller's home by the child protective services.
Trivia
In 1990, Richards had a rushed breast implant operation in which the surgeon put in larger implants than what the actress had asked for!
She was featured in the NOH8 Campaign where she spoke in support of gay marriage. During the campaign, she also stated that she had a lesbian affair in the past.
On November 8, 2006, while filming a movie, Richards assaulted two photographers after they took her picture. She even threw their laptops; however no charges were filed against her.
The American beauty has worked with the Best Friends Animal Society on numerous projects including Pup My Ride program.

See the events in life of Denise Richards in Chronological Order 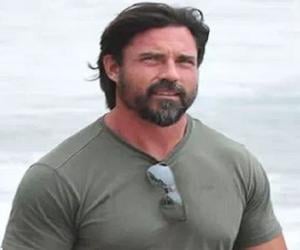