David Blaine is an American magician and illusionist, counted among the most popular magicians in modern times. Very famous as a performer of street and close-up magic, he is best known for his endurance stunts, such as living in a glass box for days. His street illusion of defying gravity to levitate himself in front of baffled onlookers is equally well known. An internationally renowned star in the field of magic, David has performed numerous successful shows all over the world. He became interested in magic as a four year old when he first saw a magician performing a live show. The little boy was hooked and started practicing magic with tarot cards given to him by his grandmother who was a gypsy. He demonstrated a trick to his neighbour who was awestricken with wonder and his neighbour’s genuine reaction motivated him to pursue magic as a career. As a teenager he also developed an interest in acting and attended drama school. By the time he was 20, he had blossomed into a skilled illusionist and a charismatic performer. After establishing himself as a popular street magician, he ventured into television with the NBC special ‘David Blaine: Street Magic’. From there it did not take him long to charm the world with his innovative tricks and illusions and soon he became one of the world’s most famous magicians. Penn Jillette
4th April In History
DID WE MISS SOMEONE?
CLICK HERE AND TELL US
WE'LL MAKE SURE
THEY'RE HERE A.S.A.P
Quick Facts 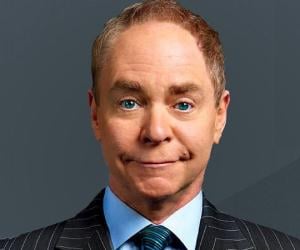 American People
American Magicians
Aries Men
Childhood & Early Life
David Blaine White was born on April 4, 1973, in Brooklyn, New York City, U.S. to Patrice Maureen White, a school teacher, and William Perez, a veteran of the Vietnam War. He is of mixed ancestry.
He was raised by a single mother who worked at several jobs to make ends meet. As a four year old David saw a magician performing tricks in the subway and was thoroughly fascinated. He started practicing magic tricks himself with the tarot cards presented to him by his grandmother.
He attended Passaic Valley Regional High School. He developed an interest in acting as a teenager and went to an acting school in Manhattan.
By the time he was 20, he had decided that he wanted to devote his life to magic. He received considerable support from his mother but she tragically passed away due to cancer when David was 21. 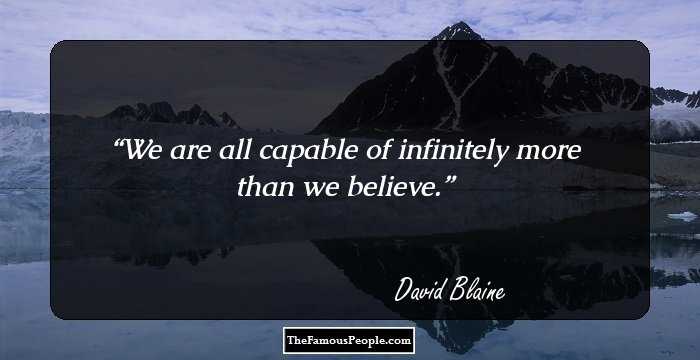 Quotes: Believe
Continue Reading Below
Career
David Blaine started out as a street performer and was able to gain considerable popularity due to his intuitive tricks and charismatic personality. His success as a street magician prompted him to record a tape of his performance which he sent to NBC.
He was soon invited for an interview and his first television special, ‘David Blaine: Street Magic’ was aired on NBC on May 19, 1997. It was very successful and was followed by ‘David Blaine: Magic Man’ two years later.
For his shows he travelled across the country and performed tricks in the streets before real, unsuspecting people. He performed such tricks in Atlantic City, Compton, Dallas, the Mojave Desert, New York City, and San Francisco, and was soon a national celebrity.
He performed his first endurance stunt in 1999, by submerging himself in a 3-ton water-filled tank for seven days. He touched new heights of fame following this trick as he had outdone his hero, Harry Houdini, who had planned a similar feat but died in 1926 before he could perform it.
In 2000 he performed a stunt called "Frozen in Time" in which he was frozen into a block of ice for 63 hours, 42 minutes and 15 seconds. Three years later, on September 5, 2003 he began his 44-day endurance stunt sealed inside a transparent Plexiglas case suspended 9 metres (30 ft) in the air next to Potters Fields Park on the south bank of the River Thames. He emerged from the case on October 19, murmuring "I love you all!"
Over the years his tricks became increasingly dangerous and more exciting to watch. On May 17, 2006, the illusionist was submerged in an 8 feet diameter, water-filled sphere in front of the Lincoln Center in New York City for seven days and seven nights. Air and nutrition was provided to him via tubes. At the end of the week, Blaine attempted to free himself from handcuffs and chains put on him after coming out of the sphere, but was unable to do so, and had to be helped by support divers.
Over the next few years he performed such dangerous shows like ‘Dive of Death’ (2008) and ‘Electrified: One Million Volts Always On’ (2012), the latter of which was a 72-hour endurance stunt performed atop a 22-foot high pillar on Pier 54 in New York City. He neither ate food nor slept for the entirety of the stunt.
In 2013, he starred in a 90-minute ABC television special, ‘David Blaine: Real or Magic’ where he performed magic tricks for his favorite celebrities and public figures including Woody Allen, Robert De Niro, George W. Bush, Bryan Cranston, Aaron Paul, Harrison Ford, Kanye West, Jamie Foxx, and Ricky Gervais.
Major Works
His 2003 stunt ‘Above the Below’ was one of his much publicized ones. Meant to be a 44-day endurance stunt, Blaine was sealed inside a transparent Plexiglas case suspended 9 metres (30 ft) in the air next to Potters Fields Park on September 5. He survived on just 4.5 litres of water per day over the period and went without any food or nutrients. He completed the stunt successfully and earned much media attention.
Awards & Achievements
David Blaine is a recipient of the Magician of the Year Award.
Philanthropic Works
He often performs magic at children’s wards, burn units and juvenile wards in hospitals all over the country. He has also performed for children diagnosed with serious illnesses at the Hole in the Wall Gang Camp.
He performed for 72 hours in the "Magic for Haiti" event in Times Square in January 2010, and raised nearly $1, 00,000.
Personal Life & Legacy
David Blaine was once engaged to Alizee Guinochet with whom he has a daughter.

See the events in life of David Blaine in Chronological Order