(Rapper Best Known for His Singles ‘Gangsta's Paradise’ and ‘My Soul’)

Coming from a broken home, Coolio fought poverty and drug addiction to become one of the most successful rappers of the 1990s. His first two singles, ‘Watch Gonna Do’ and ‘You're Gonna Miss Me,’ did not evoke any enthusiasm from music lovers. His role in the Gangsta rap group WC and the Maad Circle’s debut album was also limited. He decided to go solo and released the album It Takes a Thief. Its single Fantastic Voyage gave him the much-needed breakthrough. The album was refreshing as it replaced dark and violent lyrics heard on typical rap tracks with a humorous and happy outlook. He closely followed his debut album with the song Gangsta's Paradise for the film Dangerous Minds. It found unprecedented success and was an international hit. He released an album of the same name which was certified double platinum, thanks to the two singles, '1, 2, 3, 4 (Sumpin' New)' and 'Too Hot'. Although his third album, My Soul, did well, it could not replicate the success of his previous albums. His subsequent albums were also poorly received. He acted in several films and television series, either playing himself or doing minor roles. He also appeared on numerous cookery shows and contests.

Jennifer Lopez
1st August In History
DID WE MISS SOMEONE?
CLICK HERE AND TELL US
WE'LL MAKE SURE
THEY'RE HERE A.S.A.P
Quick Facts

He joined the street gang Baby Crips, and tried to create a wild and violent image of himself by carrying weapons to school. His studies suffered after being jailed for several months for larceny.

After high school, he attended Compton Community College and renewed his interest in rap, and performed in contests where he was called ‘Coolio Iglesias.’ He also performed on L.A’s rap radio station, KDAY.

To overcome his cocaine addiction, which disrupted his budding career as a rapper, he entered rehab. When he came out, he worked various odd jobs, but was determined to revive his rap career. 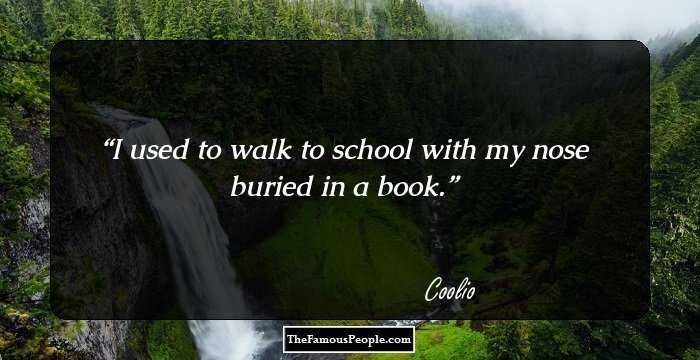 In 1987, Coolio recorded two singles, Watch Gonna Do and You're Gonna Miss Me. He joined the Gangsta rap group WC and the Maad Circle four years later.

In 1994, his debut solo album, It Takes a Thief, boasted the hit single Fantastic Voyage that reached No. 3 on the Billboard Hot 100, and minor hits, including County Line and I Remember.

Cashing on the success of Gangsta's Paradise, he released an album by the same name in 1995. This double platinum album had two hit singles ‘1, 2, 3, 4 (Sumpin' New) and Too Hot.

Despite having officially left the band WC and the Maad Circle, he contributed to their second album, Curb Servin (1995) and featured in the single In a Twist.

In 1996, he had the hit It's All the Way Live (Now) from the soundtrack to the movie Eddie, and also featured on the song Hit 'em High, from the film Space Jam.

For Red Hot Organization's much acclaimed compilation CD America is Dying Slowly, in 1996, he contributed the single I Breaks ‘Em Off, and recorded the theme song for the TV series Kenan & Kel.

His 1996 album, My Soul, certified platinum, included the super hit single C U When U Get There, but performed below expectations, and Tommy Boy Records ended their contract with the singer.

Between 2001 and 2008, he released four albums: Coolio.com, El Cool Magnifico, The Return of the Gangsta, and Steal Hear, which failed to show up on the charts.

In 2002, he appeared on the television program Celebrity Fear Factor, calling himself “El Cool Magnifico” (which became the name of his fourth studio album). That year, he won the Celebrity Bootcamp.

He was a regular performer at The Gathering of the Juggalos, an annual festival organized by Psychopathic Records. The event spans five days, and over 107,000 music lovers attend it annually.

In 2008, he hosted Cookin’ with Coolio, an online cooking show along with jazz artist Jarez, for the website My Damn Channel - a cookbook based on the show was released the next year.

In 2009, he appeared on the television show Celebrity Big Brother. He appeared on Ultimate Big Brother the following year, but was removed from the house for objectionable behavior towards his housemates.

In January 2012, he was the runner-up in the Food Network reality series Rachael vs. Guy: Celebrity Cook-Off. He represented the Music Saves Lives organization and won $10,000 for his charity.

The rapper continued to perform in concerts. In February 2014, he shared the stage with Goast, Jarel and DJ Locomotive in Ketchum, Idaho.

Major Works
Coolio’s 1994 album, ‘Takes a Thief’, climbed to No. 8 on the Billboard 200, and was certified Platinum. The album was appreciated for the humorous take on typical gangsta rap themes.

His song ‘Gangsta’s Paradise’ in the 1995 movie ‘Dangerous Minds’ stayed on the top of the Billboard Hot 100 chart for 3 weeks. It was a No.1 hit in Europe, Australia and New Zealand.

In 1996, Coolio won a Grammy for the Best Rap Solo Performance for the single Gangsta’s Paradise. He was the American Music Award’s Favorite Rap/Hip Hop Artist that year.

Coolio fathered eight children named Milan, Jackie, Artisha, Zhaneand, Grtis, Artis, Darius, and Brandi from relationships with different women, and he also had twin daughters Kate and Shayne. On May 18, 1996, he married Josefa Salinas but the couple divorced in 2000. He was charged with battery for punching his girlfriend in 2013.

A spokesman for Environmental Justice and Climate Change, he was dedicated to educating students at historically black colleges about global warming. He was also the spokesperson of Asthma and Allergy Foundation of America.

Coolio was found unresponsive at a friend's hous in Los Angeles on September 28, 2022, and declared dead. He was 59.

This rapper sports a weird hairstyle with braids that stick out all over his head. Presently, he had a bald patch in the center, but his spidery braids remain.

See the events in life of Coolio in Chronological Order