Born Carlton Douglas Ridenhour, he adopted the stage name, Chuck D, and became the leader of the band, ‘Public Enemy’. His lyrics are socially and politically charged and motivate fellow American, especially the African-American community to rise against any prevailing discriminations and social evils. He is naturally blessed with a powerful rapping voice that resonates and gives a distinct character to his rap numbers. His views on some sensitive issues have snowballed into controversies, but he held fast to them. He expressed his concern about the use of drugs and guns by the black community which has contributed to their criminalization, and felt that a black person was more likely to be charged and prosecuted for a drug related offence than a white man, a point of view which was criticized as being racist. The rapper and his band, ‘Public Enemy’, refused to recognize civil rights leader, ‘Martin Luther King’ and even called for armed insurrections and assassinations. He wanted the black community to be more assertive, take control of whatever they produce artistically and not let record companies exploit them. He sought to cultivate a fan base among the white community too, to make them aware of the problems and frustrations within the black community. Snoop Dogg
1st August In History
DID WE MISS SOMEONE?
CLICK HERE AND TELL US
WE'LL MAKE SURE
THEY'RE HERE A.S.A.P
Quick Facts

American People
African American Singers
Rappers
Hip Hop Singers
Lyricists & Songwriters
Childhood & Early Life
Chuck D was born in Queens, New York to Judy and Lorenzo Ridenhour who were political activists. He was raised with his three siblings, Henry and Paul and Thelma, with independent thoughts.
He displayed his talent by actively participating in many hip-hop events in high school. A brilliant student, he turned down an architecture scholarship to pursue graphic design at Long Island's Adelphi University. 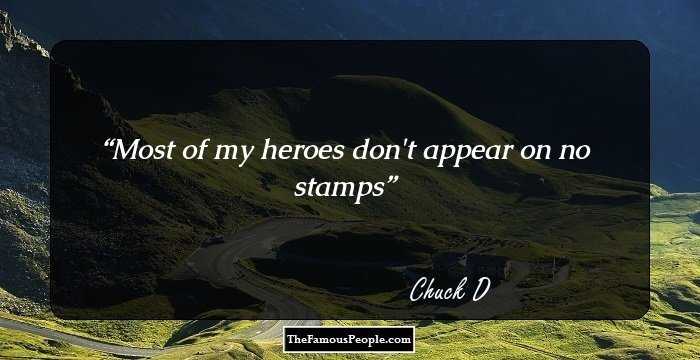 The Hottest Male Celebrities With The Best Abs
Career
Rick Rubin, a fledgling American record producer heard Chuck D on a friend’s demo recording and wanted to sign him to his Def Jam Label which aimed to popularize hip- hop music.
In 1987, the rapper and his group ‘Public Enemy’ released the album, ‘Yo! Bum Rush the Show’, on Def Jam Recordings which peaked at No.28 on the ‘Top Black Albums Chart’.
In 1990, ‘Fear of a Black Planet’, the third album of ‘Public Enemy’ was released. The album voiced its concerns and opinions on the African–American community, their empowerment and social troubles.
‘Greatest Misses’, ‘Public Enemy's first compilation album was released in 1992. It features new tracks as well as mixes of previously released songs, such as, ‘Tie Goes to the Runner’ and ‘Hit Da Road Jack’.
‘Muse Sick-n-Hour Mess Age’, meaning music and our message, released in 1994, received a mixed response from music critics, some of whom criticized the group’s relevance in the hip-hop scene of the time.
The rapper contributed many solo performances to several episodes of the PBS documentary series, ‘The blues’, produced by Martin Scorsese. The series was dedicated to tracing the various stages in the development of blues.
In 1996, he released his first ever solo album, ‘Autobiography of Mistachuck’. It peaked at No.190 on the Billboard 200 Charts and critics felt that it was an improvement over his band albums.
He was featured prominently in a 2008 documentary film directed by MK Asante Jr, ‘The Black Candle’, about Kwanzaa, a weeklong celebration of the African heritage observed by the African–American people in the U.S. 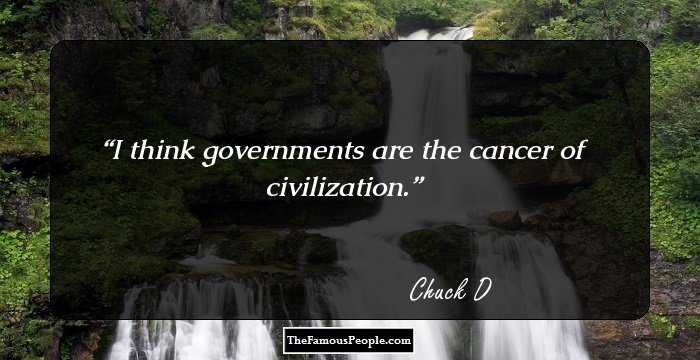 Quotes: Think, I
Continue Reading Below
Major works
In 1988, ‘Public Enemy’ led by Chuck D, released the album, ‘It Takes a Nation of Millions to Hold Us Back’. Hailed for its strong social commentary, it was certified platinum by RIAA.
‘Apocalypse 91... The Enemy Strikes Black’, released in 1991, reached No.4 on the Billboard 200 and topped the ‘Top Hip-Hop Albums’ charts. Certified platinum, it is considered as one of the best in the genre.
Awards & Achievements
‘Public Enemy’ was nominated for the Grammys, for four successive years from 1990 onwards in the ‘Best Rap Performance by a Group’ category and also in the category the ‘Best Metal Performance for the single’, ‘Bring the Noise’.
‘Public Enemy’ was nominated thrice for the ‘American Music Awards’ in the ‘Favorite Rap/Hip Hop’ category between 1989 and 1992. However, the band’s popularity and nominations never translated into wins.
In May 2013, the rapper was conferred an honorary doctorate by the Adelphi University of Long Island. The rapper, an alumnus of the university, was invited to speak at the commencement ceremony.
In 2013, he was honored with ‘The Paul Robeson- Here I Stand Award’, by The ‘Hung Tao Leadership Institute’ at the Lincoln Theatre, Washington. 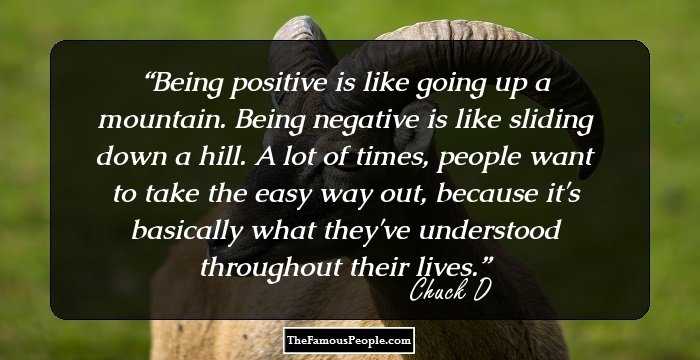 Quotes: Like
Personal Life & Legacy
Chuck D is married to Dr. Gaye Theresa Johnson, an associate professor in the Department of Black Studies at the University of California, Santa Barbara whom he describes as three-quarters of his whole brain.
In 1999, he launched a supersite on the website, Rapstation.com. It was intended to have original programming content and showcase many of hip-hop’s prominent celebrities, interviews, and also offer free MP3 downloads and ringtones.
Trivia
This American rap legend is a known pescatarian which means his diet could include any typical vegetarian item and also seafood, but not flesh of other animals.
This famous rapper admires baseball greats Hank Aaron, Willie Mays, and Reggie Jackson; basketball star Willis Reed; football star Gale Sayer; and former heavyweight boxing champion Muhammad Ali.

Grammy Awards
Recommended Lists:
Musicians #1525
Singers #810
You May Like

See the events in life of Chuck D in Chronological Order