(One of the Highest-Grossing US Actresses of All-Time)

Very few Hollywood actresses have been as lucky as Cameron Diaz, who got the opportunity to make her Hollywood debut with the big-budget mega hit ‘The Mask’. The movie catapulted her career and she went on to appear in several box office hits, including ‘My Best Friend’s Wedding’. With her enchanting looks, blue eyes, and blonde hair, Diaz won the hearts of millions. She delivered brilliant performances in movies like ‘My Sisters Keeper’, ‘There’s Something About Mary,’ and ‘Vanilla Sky’. She has also made appearances on ‘Saturday Night Live’, ‘Top Gear’ and was a guest judge on the television show ‘The X factor’. Diaz began her career in the entertainment industry as a model, and appeared for brands like Calvin Klein and Levi's by the age of 16. With her stellar performances, this Californian beauty has established herself as one of the A-listers in Hollywood. She has also been voted the best looking female star by many prominent magazines. American People
Business Women
T V & Movie Producers
American Women
California Actresses
Childhood & Early Life
Cameron Diaz was born to Emilio Luis Diaz, a field gauger at an oil company and Billie Joann, an import-export agent in San Diego, California. She has an elder sister. She grew up in the city of Long Beach in Southern California and studied at the Long Beach Polytechnic High School.
At the age of 16, she began her modelling career and soon after she signed a contract with ‘Elite Model Management’, and worked as a model for Calvin Klein and Levi's. In July 1990, at the age of seventeen she was featured on the front cover of the teenage magazine ‘Seventeen’.

Continue Reading Below
Career
At the age of 19, she first starred in the 30-minute soft adult movie titled 'She's No Angel', before she made her appearance in Hollywood.
In 1994, she was starred in the hit superhero fantasy film ‘The Mask’, along with Jim Carrey, which earned her Golden Globe nomination.
In 1995, she appeared in the ‘The Last Supper’, directed by Stacy Title; the film was about five graduate students who plot a murder.
In 1996, she played the role of ‘Heather Davis’ in ‘She’s the One’, a comedy- drama film directed by Edward Burns. The same year she appeared in the film ‘Feeling Minnesota’.
In 1997, she delivered an award winning performance in the romantic movie ‘My Best Friend’s wedding’, starring Julia Roberts, Dermot Mulroney, Rupert Everett, and Philip Bosco. She also appeared in ‘A Life Less Ordinary’, the same year.
In 1998, she was seen in the movies ‘Fear and Loathing in Las Vegas’, ‘Very Bad Things’ and the award winning film ‘There’s Something About Mary’.
In 1999, she appeared in the Golden Globe nominated film ‘Being John Malkovich’ and was also seen in ‘Things You Can Tell Just by Looking at Her’ and ‘The Invisible Circus’.
In 2000, she played the role of ‘Natalie Cook’ in the action comedy film ‘Charlie's Angels’ starring alongside Drew Barrymore and Lucy Liu.
In 2001, she gave the voice to the character, ‘Princess Fiona’, in the animated fantasy film ‘Shrek’, directed by Andrew Adamson and Vicky Jenson. The same year she appeared in the award winning film ‘Vanilla Sky’.
Continue Reading Below
In 2002, she acted in the film ‘The Sweetest Thing’ and she earned a Golden Globe nomination for her role as ‘Jenny Everdeane’ in the film ‘Gangs of New York’.
In 2003, she reprised her role as ‘Natalie Cook’ in the sequel of the Charlie's Angels, ‘Charlie's Angels: Full Throttle’.
In 2005, she starred in the film ‘In her shoes’, a film that essays her character ‘Maggie Feller’s’ emotional journey through relationships, love, sisterhood and womanhood.
In 2008, she starred in one of her most popular flicks ‘What Happens In Vegas’, a romantic comedy film starring Ashton Kutcher.
In 2009, she starred in the film ‘My Sisters Keeper’, which was based on Jodi Picoult's novel of the same name.
In 2011, she was seen in movies like ‘The Green Hornet’ and ‘Bad Teacher’. The next year, she appeared in films like ‘What to Expect When You're Expecting’, ‘A Liar's Autobiography’, ‘Gambit’ and ‘The Counselor’.
She is currently filming for the film ‘The Other Woman’, which is scheduled to release in 2014. 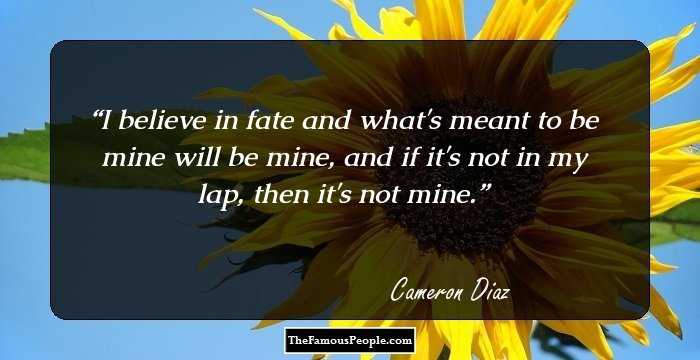 Quotes: Believe
Major Works
She starred in the Academy Award nominated film ‘The Mask’, which was a major financial success and it earned whopping $350 million worldwide. It was the second highest grossing superhero film that year.
Continue Reading Below
She acted in ‘My Best Friend’s Wedding’ which was a global box office hit that earned $299.99 million worldwide. The film was one of the biggest films of 1997.
She starred in ‘There’s Something About Mary’ which was ranked 27th in the American Film Institute's list of ‘100 Years, 100 Laughs: America's Funniest Movies’. It was also the highest grossing film of 1998 and earned $369 million worldwide.
Awards & Achievements
In 1998, she was the recipient of the ALMA award in the category, ‘Outstanding Individual Performance in a Crossover Role in a Feature Film’ for ‘My Best Friend's Wedding’.
In 1999, she won the American Comedy Awards in the category, ‘Funniest Actress in a Motion Picture’ for ‘There's Something About Mary’.
In 2009, she received a Star on the ‘Walk of Fame’ at 6712 Hollywood Boulevard. 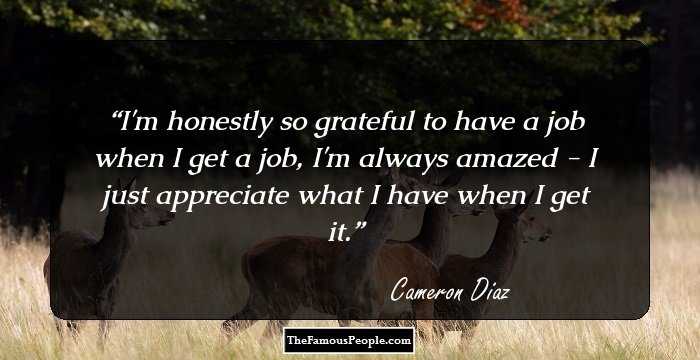 Personal Life & Legacy
From 1990 to 1994, she was in a live-in-relationship with video producer, Carlos de la Torre.
She has been romantically involved with actor Vincent D'Onofrio, actor Matt Dillion, Jared Leto, and courted Justin Timberlake for a period of 3 years.
From 2010 to 2011, she dated New York Yankees baseball star, Alex Rodriguez.
She is involved with ‘Iraq and Afghanistan Veterans of America’, one of the largest non-profit associations for veterans of the wars in Iraq and Afghanistan.
Trivia
This Golden Globe nominated A-list Hollywood diva once broke her nose in a surfing accident in Hawaii on her birthday.

Quotes By Cameron Diaz | Quote Of The Day | Top 100 Quotes

See the events in life of Cameron Diaz in Chronological Order