Brooke Smith is an American actor, best known for her performances as 'Dr. Erica Hahn' in the series 'Grey's Anatomy' and 'Catherine Martin' in the film 'The Silence of the Lambs.' The daughter of renowned publicist Lois Eileen Smith, Brooke is an 'American Academy of Dramatic Arts' alumna. Hence, she delved into the entertainment business armed with strong skills. 'The Silence of the Lambs' was her second film. It had Brooke proving her mettle as an actor. She eventually made a niche for herself in the industry with meatier roles in 'Vanya on 42nd Street,' 'Bates Motel,' 'Series 7: The Contenders,' and many such acclaimed projects. Some of her major projects were the comedy–drama film 'In Her Shoes,' Woody Allen's 'Melinda and Melinda,' and the play 'Stop Kiss.' ‘Stop Kiss’ was staged at 'The Public Theatre' and directed by Jo Bonney. She is also interested in journalism and has interviewed actors such as Steve Buscemi, Ed Harris, and Fred Ward. An avid traveler, Brooke has traveled extensively, especially to Africa.
Continue Reading Below 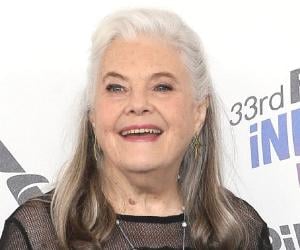 Famous Beautiful Women With Green Eyes
Career
Brooke began her career playing 'Abigail' in the 1988 Alan Rudolph film 'The Moderns' and simultaneously played 'Risa' in an episode of the 'CBS' crime drama 'The Equalizer.'
Her next film, 'The Silence of the Lambs,’ had her playing a more substantial role. The 1991 neo-noir psychological horror film featured her as the 'Catherine Martin,' a senator's daughter, abducted by 'Buffalo Bill' (played by Ted Levine).
Brooke bagged the third place in the run for the 'Boston Society of Film Critics Award' and the 'National Society of Film Critics Award.' She also earned an 'Independent Spirit Award’ nomination for the ‘Best Supporting Female,' for her supporting role of 'Sonya' in the 1994 film 'Vanya on 42nd Street,' adapted from Anton Chekhov's play 'Uncle Vanya.'
In 1996, Brooke appeared as 'Margot Bell' in an episode of the 'NBC' police-procedural drama 'Law & Order.' She reprised the role in 2005. In 2007, she played a different character, 'Ms. Kurland,' in the series. She was seen as 'Tessa Rankin' in an episode of 'Law & Order: Criminal Intent' (2002) and as 'Delia Wilson' in three episodes of 'Law & Order: Special Victims Unit' (2012).
Brooke had brief recurring roles in the British–Canadian horror anthology 'The Hunger' (as 'Lee Cooper' in two episodes, 1998–1999) and the 'CBS' drama 'Big Apple' (as 'Lois Mooney’ in three episodes, 2001).She starred as 'Rosemary Smith' in the 1998 drama film 'The Broken Giant.'
In 2000, Brooke performed in several New York City ‘off-Broadway’ productions. One of them was 'Little Monsters' by playwright Alan Bowne.
The 2001 dark satirical comedy 'Series 7: The Contenders' was a marathon of the seventh series of the American reality show 'The Contenders,' where six people were picked to kill each other for the camera. The film starred Brooke as 'Dawn Lagarto,' the ruling champion from the fifth and the sixth series.
Brooke portrayed American pacifist and US suffrage movement leader Mabel Vernon in the 2004 historical drama feature 'Iron Jawed Angels.' She was seen as 'Carolyn Pope' (three episodes, 2004) in the 'HBO' drama 'Six Feet Under' and as 'Sarah' (four episodes, 2006) in the 'NBC' drama 'Heist.'
Brooke shared a 'Screen Actors Guild Award' nomination with the cast of the 'ABC' medical drama 'Grey's Anatomy,' which featured her as heart surgeon 'Erica Hahn' (25 episodes, 2006–2008). The character was introduced through the second and third seasons and joined the main cast in the fourth season.
Continue Reading Below
On November 3, 2008, Brooke revealed that her role in ‘Grey's Anatomy’ was being written off. It is believed that the network executives’ discomfort with her lesbian character could have been the reason behind the decision. Hence, she decided to quit the show. However, the show's creator, Shonda Rhimes, stated that Brooke was dismissed because she could not bring any "magic and chemistry" between 'Erica' and Sara Ramirez's character, 'Callie Torres.'
In 2007, she was seen as 'Valerie Scottson' in four episodes of the 'Showtime' dark comedy–drama 'Weeds' and had a recurring role (13 episodes) as the belligerent medical examiner 'Dr. Kate Switzer' in the 'NBC' crime drama 'Crossing Jordan.'
Brooke starred as 'Andrea Smithson Darling' in the pilot of the 'ABC' primetime drama 'Dirty Sexy Money.' However, she got busy with 'Grey's Anatomy' later and was thus replaced by Sheryl Lee in the subsequent episodes.
Brooke essayed the character 'Tita Bordereau' from Henry James' novella 'The Aspern Papers' in its 2010 film adaptation. She was cast as 'Frances Simpson' in the first three seasons of the 'Showtime' crime drama 'Ray Donovan' (2013–2015).
In 2017, she starred as 'Olive' in the drama film 'To the Bone.' She had recurring roles as 'Captain Ellen Lewis' in the 'Prime Video' police-procedural series 'Bosch' (five episodes) and as 'Sheriff Jane Greene' in the 'A&E' psychological horror–drama series 'Bates Motel' (six episodes).
Brooke played 'Myra,' the lead character 'Dee Dee's (played by Patricia Arquette) power attorney, in the 'Hulu' true-crime drama 'The Act' (2019). She will be seen as 'Irena Brigante' in the upcoming drama feature 'Bombshell.'
Family & Personal Life
Brooke's father worked as a publisher, while her mother is a retired publicist.
Brooke got married to Russian cinematographer Steve Lubensky on January 6, 1999. She has a daughter named Fanny Grace Lubensky. In May 2008, the couple adopted a baby girl named Lucy Dinknesh Lubensky from Ethiopia.
On August 27, 2008, Brooke delivered a speech in support of independent presidential candidate Ralph Nader. She also opposed the ‘Commission on Presidential Debates’ at an 'Open the Debates' rally in Denver, Colorado.
Trivia
Brooke had gained 25 pounds for her role in 'The Silence of the Lambs.'

See the events in life of Brooke Smith in Chronological Order