Brie Larson is an American actor, singer, and filmmaker. She has portrayed several notable characters on TV and in movies. Larson has also received various honors, including an ‘Academy Award.’ She started acting at a very young age. At the age of 6, Larson became the youngest student to be enrolled in an acting program conducted by the ‘American Conservatory Theater.’ As a teenager, Larson acted in TV series such as ‘Raising Dad.’ In the early days of her career, she played supporting roles in movies such as ‘Hoot’ and ‘21 Jump Street.’ Larson got the first big break of her career when she was chosen to play the lead role in the movie ‘Short Term 12.’ Following its success, she played a more powerful character in the movie ‘Room.’ Larson won many awards for her stellar performance in this movie. She has also directed a few short films. Her directorial debut, ‘The Arm,’ was honored with a special jury prize at the ‘Sundance Film Festival.’ Larson is a talented singer and has released a music album, too. She is also a firm supporter of feminism and gender equality. She is one of the founders of the ‘Time’s Up’ movement, which aims to eradicate sexual abuse in the entertainment industry. American People
American Women
California Actresses
Libra Actresses
American Actresses
Childhood & Early Life
Brie Larson was born Brianne Sidonie Desaulniers, on October 1, 1989, in Sacramento, California. Her parents, Heather and Sylvain Desaulniers, were homeopathic chiropractors and worked together. She has a younger sister, Milaine. Her father was of French–Canadian origin. Larson did not receive formal school education and was schooled at home. Her first language was French.
At the age of 6, Larson expressed the desire to become an actor. Her parents took her to the ‘American Conservatory Theater,’ where she auditioned for attending the training program. Larson was the youngest student to be selected for the program.
When Larson was 7 years old, her parents divorced. This caused her to suffer an emotional crisis. Her mother moved to Los Angeles with her two daughters. There, Larson pursued her dreams of becoming an actor. The family lived in a single-room apartment and survived on meager resources. 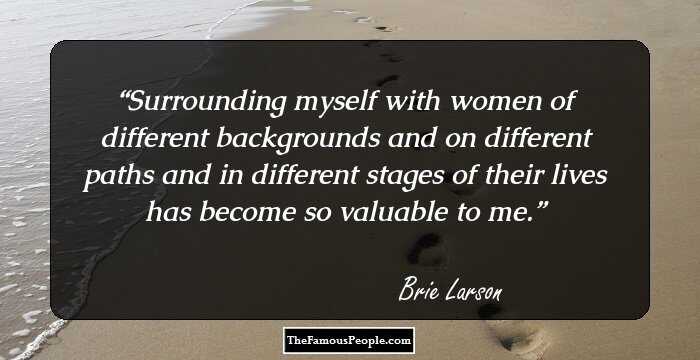 Continue Reading Below
Career
Larson started her acting career at the age of 8, with the talk show ‘The Tonight Show with Jay Leno.’ The show featured Larson performing in a parody commercial for the ‘Malibu Mudslide Barbie.’ In 2001, Larson played ‘Emily’ in the sitcom ‘Raising Dad,’ which was aired on ‘The WB’ network. The series narrated the story of a widower trying to raise his two daughters. Larson played the role of one of the daughters. The show was canceled after 22 episodes.
In 2003, Larson acted in the ‘Disney Channel’ movie ‘Right on Track.’ The same year, she started highlighting her music skills. She released several tracks on her personal website. In 2004, Larson starred in the teen movie ‘Sleepover.’ In 2006, she appeared in the movie ‘Hoot,’ with actors Logan Lerman and Cody Linley. In 2007, Larson lent her voice to the character of a penguin in the animation movie ‘Farce of the Penguins.’ She appeared in small roles in movies such as ‘13 Going on 30’ and ‘Remember the Daze.’
In 2005, Larson released her debut music album, ‘Finally Out of P.E.’ The album focused on teenage audiences. Before the release of the album, Larson released a DVD that featured the music video for one of its tracks, ‘She Said.’ The album sold a little more than three thousand copies in the US.
In 2009, Larson starred in the drama film ‘Tanner Hall.’ The movie was a coming-of-age tale of four teenage girls in a boarding school. Although the film was not a huge success, Larson’s character was noticed. The same year, she was offered the role of ‘Kate Gregson’ in the ‘Showtime’ comedy series ‘United States of Tara.’ Her role was that of a troubled teenager coping with her mother’s dissociative identity disorder.
In 2010, Larson acted in the stage adaptation of the play ‘Our Town’ at the ‘Williamstown Theatre Festival.’ The play featured her as a precocious young girl, ‘Emily Webb.’ Her character grabbed the attention of viewers and critics alike. In 2011, Larson performed a small role in the drama film ‘Rampart.’
In 2012, Larson made her directorial debut with the short film ‘The Arm.’ The film won a special jury prize at the ‘Sundance Film Festival.’ She performed in the film adaptation of the TV series ‘21 jump Street.’ Larson always won the applause of critics because of the frank humor she infused in her roles.
In 2013, Larson co-directed a short film, ‘Weighting,’ with Dustin Bowser. This film was screened at the ‘SXSW Film Festival’ and was nominated for the ‘Grand Jury Prize.’ The same year, Larson bagged her first lead role in a movie. She played ‘Grace Howard’ in the drama movie ‘Short Term 12,’ directed by Destin Daniel Cretton. The movie featured Larson as a supervisor at a home for troubled teenagers. Larson portrayed the emotionally disturbed character remarkably well. Her performance was appreciated by all.
In 2013 and 2014, Larson appeared in supporting roles in movies such as ‘The Spectacular Now,’ ‘Don Jon,’ and ‘The Gambler.’ In 2015, she was part of the comedy movie ‘Digging for Fire.’ The movie allowed Larson to improvise her role. The same year, she acted in the comedy movie ‘Trainwreck,’ which featured her as the sister of the lead character, portrayed by Amy Schumer.
In 2015, Larson bagged a career-defining role. She played ‘Joy’ in the drama film ‘Room,’ directed by Lenny Abrahamson. ‘Joy’ was portrayed as a woman held in captivity for seven years and living with her son. The emotional anguish of a mother trying to escape with her son was portrayed remarkably by Larson. Her stellar performance in the movie earned Larson the ‘Academy Award’ for the ‘Best Actress.’ She also won a ‘Golden Globe’ and a ‘BAFTA’ award for the same movie.
Continue Reading Below
After the success of ‘Room,’ Larson was offered the lead role in the action–comedy movie ‘Free Fire.’ In 2017, she played the role of a photojournalist in the movie ‘Kong: Skull Island.’ The same year, she played the protagonist in the biographical movie ‘The Glass Castle.’ It was based on the life of American author Jeannette Walls, and Larson played the role of the author. She observed Walls and her interaction with her siblings, to perform her character brilliantly.
In 2017, Larson directed her first feature film, ‘Unicorn Store.’ It was a comedy movie that had Larson in the lead role. The movie was not a huge success. Larson is currently concentrating on her acting career. She is set to appear as ‘Carol Danvers’ in the superhero movies of ‘Marvel Studios.’ 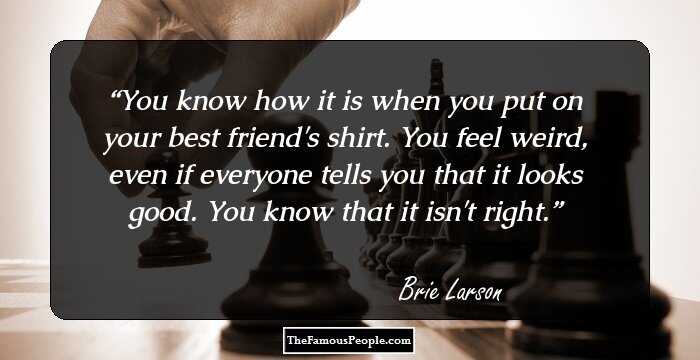 Personal Life
Larson is in a relationship with musician Alex Greenwald. The couple got engaged in 2016.
Larson is an advocate of feminism. She voices her strong protests against sexual exploitation of women and is one of the founding members of ‘Time’s Up,’ which is an initiative to prevent sexual abuse in the entertainment industry. At the 88th ‘Academy Awards’ ceremony, when a number of sexual abuse victims were brought on stage, Larson hugged each of them.
Trivia
Larson decided to change her name, as she was frustrated about her surname, “Desaulniers,” being misspelled by people. She adopted the name “Larson” from her maternal great-grandmother’s name, “Elva Josephine Larson.” Larson was also inspired by the name “Kirsten Larson,” the name of a doll she had once received as a gift.
At the 89th ‘Academy Award’ ceremony, Larson presented the award for the ‘Best Actor’ to Casey Affleck. However, due to the sexual allegations against him, Larson chose not to applaud him, even as the audience gave him a standing ovation. 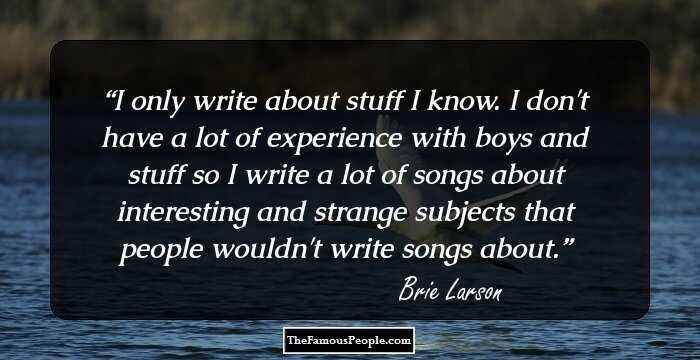 Quotes By Brie Larson | Quote Of The Day | Top 100 Quotes

See the events in life of Brie Larson in Chronological Order