Bhumibol Adulyadej was the longest reigning monarch of Thailand and the ninth king from the Chakri dynasty. Born in the U.S.A and educated in Switzerland, he was crowned to the throne of Thailand at the age of eighteen after the mysterious death of his elder brother, the eighth king of Thailand. Initially, he played only a ceremonial role; but over the time, he began to take up a more active part, attending public ceremonies and touring the far flung parts of the country, working to improve the lives of the people there. Eventually he began to take a more active role in the country’s politics, helping to defuse tension and at the same time remaining impartial. At a time when military coup was the order of the day, he provided stability to the nation and represented the unity of the country. He was an immensely popular king and died in 2016, His death was mourned by thousands of his countrymen. 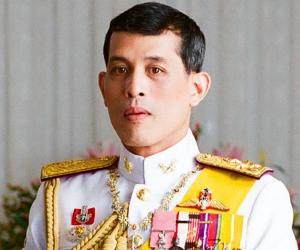 Thai Celebrities
Thai Emperors & Kings
Thai Historical Personalities
Sagittarius Men
Childhood & Early Life
Bhumibol Adulyadej was born on 5 December 1927, in Cambridge, Massachusetts. His father, Prince Mahidol Adulyadej of Songkla, the 69th child of King Chulalongkorn of Thailand, was a first class prince born to a princess mother. He was regarded as the father of modern medicine in Thailand.
Bhumibol’s mother, Mom Sangwan (later Princess Srinagarindra), was a commoner. He was born youngest of his parents’ three children, having an elder sister named Princess Galyani Vadhana, and an older brother named Prince Ananda Mahidol.
At the time of his birth, his father was studying medicine at the Harvard University. His father obtained his degree, M.D. cum laude, in 1928, after which the family returned to Thailand. In the following year, his father died of kidney failure.
Bhumibol Adulyadej began his elementary education at Mater Dei School in Bangkok. In 1933, the three siblings accompanied their mother to Switzerland. Here, Bhumibol was admitted to the École nouvelle de la Suisse romande in Lausanne. Sometime now, he developed an interest in photography.
In 1935, on abdication of throne by their childless uncle, Prajadhipok, Bhumibol’s elder brother, Prince Ananda Mahidol, was named the new king of Thailand. As he was still a minor, a regency council was formed to act in his name, allowing the family to remain in Switzerland.
For his high school education, Bhumibol was enrolled at the Gymnase Classique Cantonal of Lausanne, receiving his baccalauréat des lettres with a major in French literature, Latin, and Greek in 1945. Thereafter, he entered the University of Lausanne to study science.
After the end of the Second War, the family returned to Thailand. There on 9 June, 1946, Prince Ananda Mahidol, by then King Rama VIII, died of gunshot under mysterious condition and Bhumibol was immediately declared the new King. However, the formal coronation did not take place until 1950.
After his brother’s death, Bhumibol returned to the University of Lausanne and changed his stream, studying political science and law, hoping that they would help him to conduct his state duties. Meanwhile, his uncle, Prince Rangsit of Chainat, was appointed Prince Regent.
On 4 October 1946, he met with a road accident, which injured his back and face, permanently damaging his right eye. Because of this incident as well as other circumstances back home, his official coronation was delayed till 1950.
Continue Reading Below
You May Like

See the events in life of Bhumibol Adulyadej in Chronological Order