Advanced Search
Ashley Hinshaw is an American actress and model who became famous for her performances in the film ‘About Cherry’ and the Sony Crackle television series ‘StartUp’. In 2016, she adopted the last name of her husband, actor Topher Grace, and began using “Ashley Grace” as her professional name. Originally from Indiana, Ashley has always loved performing. Since she was nine years old, she had appeared in several children’s plays and youth theatre productions. Four years later, she started her modelling career as a beauty pageant competitor and subsequently took part in and won various beauty pageants. Ashley relocated to New York when she was 16 years old and went on to establish herself as a prominent figure in the fashion industry. She made her first onscreen appearance in the MTV reality series ‘Made’ in 2008. Her acting debut occurred in an episode of Fox’s sci-fi drama series ‘Fringe’ in 2009. Three years later, she appeared in her first film, the sci-fi thriller ‘Chronicle’. Since then, Ashley has worked in projects like ‘True Blood’, ‘The Pyramid’, ‘Agent Carter’, ‘True Detective’, and ‘The Grounds’. 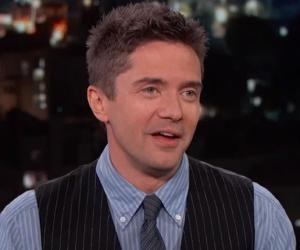 American People
American Women
Indiana Actresses
Female Models
American Models
Career
At the age of 16, Ashley Hinshaw relocated to New York in pursuit of a modelling career. She found considerable success as a model, including as part of a commercial campaign for Abercrombie & Fitch. It was her experience as a model that eventually made her first television appearance possible. In 2008, she was featured in an episode of ‘Made’.
In her acting debut, Ashley portrayed a character credited simply as “the Blonde” in a season-one episode of ‘Fringe’ in 2009. That year, she also appeared as herself in an episode of ‘Gossip Girl’. In 2011, she guest-starred in A&E Network’s crime-drama series ‘The Glades’ and played Power Girl in the short film ‘The Death and Return of Superman’. In 2012, after making her cinematic debut in ‘Chronicle’, she appeared in three other films, ‘Rites of Passage’, ‘LOL’, and ‘About Cherry’, as well as in the telefilm ‘TalhotBlond’. Among all the films she has starred in her career to date, ‘About Cherry’ is unarguably the most significant. In it, she essayed the role of Angelina, a problematic young woman who moves to San Francisco and becomes involved in the porn industry. The film had its premiere in February at that year’s Berlin International Film Festival.
In the 2013 fantasy thriller ‘+1’, she worked alongside Rhys Wakefield and Logan Miller. She then appeared in ‘Snake and Mongoose’, the 2013 biographical drama about Don "The Snake" Prudhomme and Tom "The Mongoose" McEwen, two of the greatest drag racers in history, and the rivalry that existed between them. In Philippe Terrier-Hermann’s direct-to-video drama ‘The American Tetralogy’, she was cast as the lead.
In 2014, she had the recurring role of Brigette Stackhouse, a microbiologist and wife of Jason Stackhouse (Ryan Kwanten), in the seventh and final season of the HBO supernatural drama series ‘True Blood’. In the same year, she played an archaeologist named Dr. Nora Holden in the found footage supernatural horror film ‘The Pyramid’. She was cast as Colleen O'Brien, a factory worker and Peggy Carter’s (Hayley Atwell) roommate, in an episode of the MCU show ‘Agent Carter’ in 2015. In the second season of the HBO anthology series ‘True Detective’, she appeared as Lacey Lindel, who, afraid that it would negatively affect her career as a celebrity, unsuccessfully offers casual sex to Paul Woodrugh (Taylor Kitsch) after being caught speeding.
Between 2016 and 2017, she shared screen space with Adam Brody, Edi Gathegi, Otmara Marrero, Martin Freeman, and Ron Perlman in the first season of the Sony Crackle web series ‘StartUp’. She also had a recurring role in the E! series ‘The Arrangement’ (2018) as Lisbeth, the former fiancée of Kyle West (Josh Henderson). In 2019, she starred opposite Michael Welch and Trevor Morgan in Peter O'Melia’s comedy-drama film ‘The Grounds’.
Recommended Lists:

Sagittarius Models
American Actresses
Sagittarius Actresses
Actresses Who Are In Their 30s
Continue Reading Below
Family & Personal Life
Born on December 11, 1988, in La Porte, Indiana, USA, Ashley is the daughter of Chris and Craig Hinshaw. She was nine years old when she began performing in children’s plays and youth theatre productions. At the age of 13, she took part in the Miss Maple City Pageant and Talent Competition, winning the beauty and photogenic accolade for 13- to 16-year olds and the talent prize for 8- to 14-year olds. In 2003, she was named second in the photogenic competition and third in the Queen's Court competition in the Miss Indiana American Junior Teen Pageant. She also won the state finalist application process, speech, and prettiest smile accolades. Furthermore, she reached out to more people to take part in the following year’s competition and garnered most endorsements from her fellow competitors to take part once more in the next year. When she was 14 years old, she competed in the National Miss American Coed Pageant in the Miss American Junior Teen category.
In January 2014, Ashley began her relationship with actor Topher Grace, who is best known for portraying Eric Forman in the Fox sitcom ‘That '70s Show’. The couple exchanged wedding vows on May 29, 2016, near Santa Barbara, California. They have a daughter together, Mabel Jane Grace, who was born in November 2017.
Recommended Lists: