Ariana Lee Bonfiglio is a famous TikTok star. She started her TikTok account mainly to entertain herself and to remain connected with her friends and extended family. She quickly got into the groove and started posting lots of funny lip syncs and slow-motion videos. These were liked by many and were soon shared widely, bringing in a large number of followers to her TikTok account. In a very short time, she became a popular TikTok star and was featured on the app’s homepage and was also seen in advertisements. Her collaborations with other TikTok stars enhanced her fame, making her one among the most followed social media celebrities. She currently has close to a million fans on the app and her videos have been liked several million times. Following her peers, Ariana soon branched out to open her account on Instagram. She continues to remain active on both these social media apps. She is a growing celebrity on Instagram as well and has several thousand (8000) followers and will definitely add more over a period of time. Ariana hopes to launch a YouTube channel in the near future and become a regular vlogger as well. Vincent Gigante
15th July In History
DID WE MISS SOMEONE?
CLICK HERE AND TELL US
WE'LL MAKE SURE
THEY'RE HERE A.S.A.P
Quick Facts 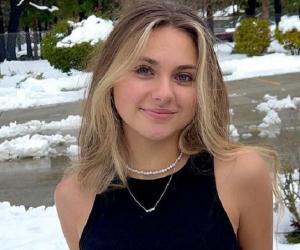 American People
Female Musically Stars
Female Social Media Stars
American Musical.ly Stars
American Social Media Stars
Rise to Fame
Despite being a late entrant to the bandwagon, Ariana has accumulated enough followers on her TikTok account to earn a ‘star status‘ and a fan following. She joined TikTok as ‘Arianalee99’ in the summer of 2018 with the hope of sharing snippets from her life as well as the intention of remaining connected with her college friends and extended family. She began posting lip-syncs, comedy videos, slow-motion videos, and other general music-related bits and slowly built up a following. Her down-to-earth attitude, combined with her chic style, earned her more fans than her initial expectations. She was also often complimented by her fans for her looks and style. She surpassed her peers by getting more and more likes and followers day by day and her videos were widely shared. She currently boasts of a fan base of over 650k fans or more and over 21.6 million likes and more for her videos. Ariana revealed that the biggest boost and motivation for her personal success was a simple rule; to not respond to any negativity.
Recommended Lists:

American Female Tiktok Stars
American Women Social Media Stars
Cancer Women
Currently, Ariana has expanded her brand and collaborated with other TikTok stars including Megan Rose, Josh Richards, and Greta Mueller. Recently, her posts have been used as advertisements to attract and increase new followers on TikTok.
After her initial success on TikTok, Ariana also opened an account on Instagram. She was immediately followed by many of her fans on TikTok. Her initial posts of her baby/childhood pictures were immensely popular making Ariana concentrate on becoming a star both on Instagram and TikTok. She started posting many more photographs of herself and her family on Instagram, much to the delight and appreciation of her fans. Her honest relationship with her boyfriend also appealed to other teenagers who began following her. Her love of photography and her natural aesthetic sense also complement her page. Ariania is currently looking to pursue a career on YouTube as well, by creating interesting videos for her followers. In a recent announcement on Instagram, she mentioned her intention of launching a YouTube channel with regular vlogs. Although she is yet to release her first vlog, her channel already has over a thousand loyal subscribers, who await her first vlog. She also has a Twitter account but it's a personal account, reserved only for her close family and friends. She currently lives in Dobbins in California and hopes to make it big on the Internet. She recently graduated High School from Maryville High.
Continue Reading Below
Family & Personal Life

Ariana Lee Bonfiglio was born on July 15, 1999 in Grass Valley, California. Although she hasn't mentioned about her parents on social media she has mentioned about her two siblings: her brother, Geno Bonfiglio, who is reserved and is rarely a part of her presence on social media and her younger sister Analeese Bonfiglio, who is a fellow TikTok star. This sibling duo often post photos of themselves together and share a deep, caring bond as sisters. She is also related to Julian Bonfiglio, who is her cousin and is an actor and musician. She belongs to a close-knit family.

Ariana Lee Bonfiglio was a relationship with Robert Anthony Carroll, a fitness instructor, physical trainer and Instagram star. They were in a relationship for more than two years and broke off in 2021.

In her spare time, she loves traveling, taking part in adventure sports, and keeping up with the latest fashion trends. She also enjoys going on road trips and after graduation has spent time visiting many beautiful sites near her hometown.

Ariana loves plants, especially succulents, and has potted a few. She also has two pets: Kuzac a bird and Oliver, a dog.