Andre Russell is a Jamaican cricketer, who plays for the West Indies cricket team at international level and for Jamaica in domestic cricket. He made his international debut as a bowler, but surprised everyone with his hard-hitting batting style. Today, Russell is one of the top all-rounders. He usually plays as a lower-middle order batsman, and is considered one of the most powerful strikers of the cricket ball among the current generation of players. His ability to rack up big runs in less number of deliveries has made him one of the top players in the ‘Indian Premier League’. In 2012, he was picked up by the ‘Delhi Daredevils,’ but he remained more of a squad player. In 2014, he was bought by ‘Kolkata Knight Riders’ and he has remained with the team since. He is one of the most coveted players in the T20 format, and plays for several T20 franchises, including the ‘Caribbean Premier League’, the ‘Indian Premier League’, the ‘Bangladesh Premier League’, the ‘Pakistan Premier League’, and the ‘Big Bash League’ in Australia. He is the only T20 bowler to have taken four wickets in four consecutive deliveries.
Continue Reading Below 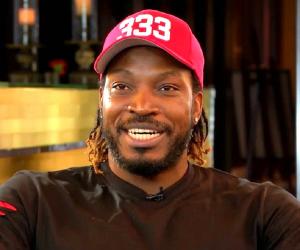 Jamaican People
Tall Celebrities
Tall Male Celebrities
Taurus Cricketers
Male Sportspersons
Childhood & Early Life
Andre Dwayne Russell was born on April 29, 1988, to Sandra Davis and Michael Russell in Jamaica. Not much is known of his early childhood except that he has three siblings.
He was brought up in poverty as his family struggled with the finances. His mother, Sandra, who is a teacher by profession, wanted him to pursue higher studies, but, Russell’s heart was set on cricket, so he requested his mother to let him try his luck in the game for two years.
Russell made his first-class cricket debut in 2007, at the age of 19.
Continue Reading Below
You May Like

The Best Black Actresses Of All Time
Career
By 2010, Russell had made his way into English club-cricket. He was signed on as ‘Barnard Green’s’ oversees player of the year. The Greens were struggling to make it to the ‘Birmingham League Cricket’ at the time. With his series-total of 799 runs and 39 wickets at an average of 10.15, Russell helped them secure promotion from ‘Worcestershire Cricket League’ into ‘Birmingham League cricket.
In June 2010, playing for the West Indies-A team, he scored 61 runs off 34 balls and snatched 6 wickets against Ireland. With this performance, he was picked-up for the senior team, and also made it to the 2011 ‘ICC Cricket World Cup’ team.
Before playing his first international ODI, he made his Test debut against Sri Lanka at Galle, in 2010. His performance was lackluster, as he scored only 2 runs and took only a single wicket. Andre Russell hasn’t played a single Test-match ever since.
His ODI debut in the 2011 ‘ICC World Cup’ at Mohali against Ireland wasn’t impressive, as he scored only 3 runs and picked up 1 wicket. But things started looking up in the second match. Playing against England, he scored 49 runs and bagged 4 wickets. He played important role in the world cup matches against Ireland and India, taking one and two wickets respectively.
Post the 2011 World Cup, he had a poor home series against the visiting Pakistan team, but he made a mark in the ODI series against India. He proved his worth both with the bat and the ball in the 3rd, 4th, and the 5th ODI. In the 5th ODI at Sabina Park in Kingston, he was adjudged the Man of the Match for his bowling as he took 4/35.
Though he made his T20 debut in 2011 against Pakistan at Gros Islet, his T20 fame came only after the Delhi Daredevils signed him for the 2012 IPL season.
In 2013, he helped Jamaica Tallawahs in the first edition of the ‘Caribbean Premier League’.
He made a record by picking up four wickets in four successive deliveries against India in a T20 match on September 21, 2013.
In 2014, he was signed by the IPL franchise ‘Kolkata Knight Riders’. He played limited number of matches for KKR that season, but the 2015 IPL turned out to be the turning point in his cricketing career. He scored three half-centuries that season, accumulating a series-total of 326 runs at an astronomical strike-rate of around 192.00. His performance with the ball was equally impressive, as he took a total of 14 wickets. He was bagged the ‘Man of the Match’ award thrice and adjudged the ‘Most Valuable Player’ for the 2015 IPL.
He was on the winning side of most of the league tournaments he played in 2016 – ‘Bangladesh Premier League’ with ‘Comilla Victorians’, the ‘Big Bash League’ with ‘Sydney Thunder’, and ‘Pakistan Super League’ with ‘Islamabad United’.
He rescued the West Indies in the semi-finals of the 2016 ICC World T20 by hitting an unbeaten 43 off 20 balls against India. This was a crucial win for the Windies, as the side went on to win the cup - the only team to have won it twice.
In January 2017, Russell was found guilty of flouting rules about his whereabouts on three different occasions, which amounts to a failed dope test. The ‘World Anti-Doping Agency’ banned him from playing any form of cricket for a year, between January 31, 2017 and January 30, 2018. This verdict was extremely damaging as it came at a time when he was in excellent form.
He was retained by KKR for the 2018 IPL season, and he repaid the trust reposed in him with some spectacular performances. Upon his return, Russell set the Chepauk stadium on fire with a massive 88 off 36 balls against ‘Chennai Super Kings’.
He also played domestic cricket for Jamaica, and joined ‘Islamabad United’ for half a season of ‘Pakistan Super League’.
In the 2018 ‘Caribbean Premier League,’ he took a hat-trick and scored the fastest century (40 balls), breaking his own record (42 balls) of 2016.
Family & Personal Life
In 2014, Andre got engaged to his long-time girlfriend, Jassym Lora, a model and an Instagram sensation from the Dominican Republic. The couple formally tied the knot in 2016.
Trivia
Russell has also ventured into the world of music. He recorded two English solos under his artist name ‘Dre Russ’ in collaboration with singer Beenie Man, in 2014.

See the events in life of Andre Russell in Chronological Order