Amy Sedaris is a famous American actress best-known for her character as ‘Jerri Blank’ in the hit Comedy Central series, ‘Strangers with Candy’. Apart from being an actress, she is also a prolific writer and a comedian and is also associated with her writer-humorist brother, David Sedaris. She has written a number of books such as ‘I Like You: Hospitality under the Influence’, ‘Wigfield’ and ‘Simple Times: Crafts for Poor People’, to name a few. She has also written a number of plays along with her brother David, including, ‘Stump the Host’, ‘Stitches’ and ‘One Woman Shoe’ under the name, ‘The Talent Family’. Throughout her career, she became famous for her hippie depiction of stage and television characters. In addition to her print work and the show, ‘Strangers with Candy’, she also appeared in other shows such as ‘Monk’, ‘Just Shoot Me’ and ‘Sex and the City’ and was also cast in a number of popular movies for adults and children alike including, ‘School of Rock’ and ‘Shrek the Third’. Work aside, this beautiful actress and writer also runs a cupcake and cheese ball business, during her spare time. Blake Lively
29th March In History
DID WE MISS SOMEONE?
CLICK HERE AND TELL US
WE'LL MAKE SURE
THEY'RE HERE A.S.A.P
Quick Facts

American People
Actresses
Comedians
American Women
New Yorkers Actresses
Childhood & Early Life
Amy Louise Sedaris was born to Sharon and Lou Sedaris in Endicott, New York. She was raised in Raleigh, North Carolina along with her siblings, David, Lisa, Gretchen, Tiffany and Paul.
When she was a teenager, she worked with the ‘Winn-Dixie’ supermarket, but was fired from her position as a cashier. She then served as a cocktail waitress at a comedy club in Chicago, but was fired from there too.
She got her first break in a television movie, ‘Big Deals’ as Topas Radulavitch, in 1991. During this time, she was also a member of Chicago-based improvisational enterprise, ‘The Second City’, and ‘Annoyance Theatre’. 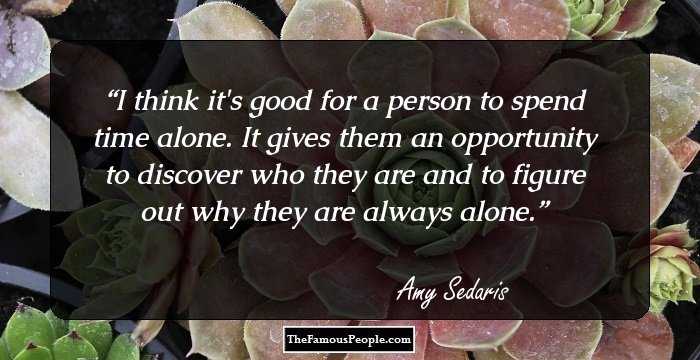 Quotes: Think, Time, Alone, I
Continue Reading Below
Career
She got her first break with the Comedy Central show, ‘Exit 57’ in 1995, which ran for three seasons. Two years later, she appeared in the movies, ‘Bad Bosses Go to Hell’ and ‘Commandments’.
She coauthored a number of plays along with her brother, David Sedaris, till 1997 such as ‘One Woman Show’, ‘Incident at Cobbler’s Knob’ and ‘The Little Frieda Mysteries’.
In 1998, she starred in the movies, ‘Wheels of Fury’, ‘Strangers with Candy: Retardation, a Celebration’ and ‘Six Days Seven Nights’.
From 1999 to 2000, she was cast as the famous ‘Jerri Blank’ in the hit Comedy Central Show, ‘Strangers with Candy’, for which she appeared in 30 episodes. The next year, she was seen in the television series’ ‘Fling’ and ‘Just Shoot Me’.
Apart from acting, she is also a writer. She co-authored the text-and-picture novel, ‘Wigfield’ along with Steven Colbert and Paul Dinello, in 2003. The same year, she starred in the movies, ‘School of Rock’ and ‘Elf’.
From 2004 to 2006, she was cast in the movies, ‘Neurotica’, ‘My Baby’s Daddy’, ‘Strangers with Candy’, ‘Bewitched’, ‘Romance & Cigarettes’, ‘Chicken Little’, ‘Full Grown Men’ and ‘I Want Someone to Eat Cheese With’. During this time, she also wrote a monthly advice column in ‘The Believer’.
She was also seen in the television series’, ‘Ed’, ‘Law & Order: Special Victims Unit’, ‘The Colbert Report’, ‘Sesame Street’ and ‘My Name is Earl’, during this period. In 2006, she authored, ‘I Like You: Hospitality Under the Influence’.
2007 was an extremely busy year for the actress as she starred in the movies, ‘Snow Angels’, ‘Dedication’, ‘Shrek the Third’ and ‘Puberty: The Movie’. She was also seen in the television shows, ‘Andy Barker, P.I’ and ‘Rescue Me’. The next year, she was on the show, ‘Yo Gabba Gabba!’ as the ‘Tooth Fairy’.
From 2008 to 2011, she was seen in the movies, ‘Gym Teacher: The Movie’, ‘Space Buddies’, ‘Tanner Hall’, ‘Jennifer’s Body’, ‘The Best and the Brightest’ and ‘Puss in Boots’. During this period, she also authored the book, ‘Simple Times: Crafts for Poor People!’
Continue Reading Below
During this time, she also appeared in the shows, ‘American Dad!’, ‘The Middle’, ‘SpongeBob SquarePants’, ‘Hot in Cleveland’ and ‘Bob’s Burgers’.
From 2012 to 2013, she was seen in more television shows rather than films, including ’30 Rock’ and ‘The Heart, She Holler’. 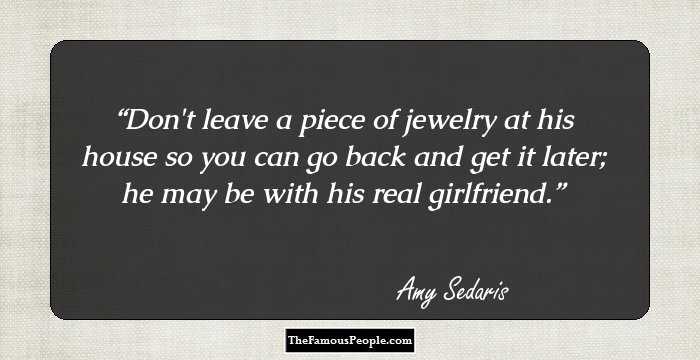 Quotes: You
Major Works
Her magnum opus is her role as ‘Jerry Blank’, the main protagonist of the Comedy Central show, ‘Strangers with Candy’. This is regarded as one of her best works.. Although the show was cancelled after three seasons, it was ranked as ‘#30’ on TV Guide’s ‘Top Cult Shows Ever’. The show became so popular, that it even spawned a film adaptation with the same title.
Personal Life & Legacy
She was in a relationship with her ‘Strangers with Candy’ co-star, Paul Dinello. The relationship lasted for eight years before they parted ways. Since their break-up, they have remained close friends and she is currently the godmother to his son.
She has expressed that she is not interested in getting married or having children.
Apart from acting, she runs her own cupcake and cheeseball company from her kitchen called, ‘Dusty Food Cupcakes’.
She is an avid PETA supporter. 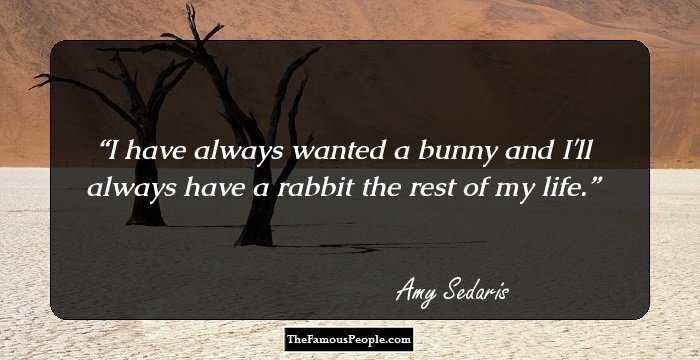 Quotes: Life, I
Trivia
This popular American actress of the ‘Strangers with Candy’ fame also works as a waitress sporadically at ‘Mary’s Fish Camp’.

Quotes By Amy Sedaris | Quote Of The Day | Top 100 Quotes

See the events in life of Amy Sedaris in Chronological Order