Alicia Christian Foster, popularly known as Jodie Foster, is an American actress, director and producer. She has won many BAFTAs, Academy Awards and Golden Globes in a career that spanned from her childhood to maturity. She started her Hollywood career at the tender age of three since her mother was a film producer. She appeared in television commercials, sporadic episodes of television series and television movies, initially. Being fluent in French and living in France for many years only helped Foster to make her mark in the French cinema and French music circuit through singing. She acted in various Disney movies even until she was a teenager and her transition into the film career was a bit of a tricky task because her initial movies as non-child artist did not achieve commercial success. But all of this changed when ‘The Accused’ and ‘The Silence of the Lambs’ were released and her performance was critically acclaimed and awarded. Foster is not only an actor of brilliant intensity but also an experimenting director and has directed movies of various genres. For her impeccable contribution to the world of cinema as a woman, she has been awarded with the Crystal Award by Women in Film. American People
Directors
American Women
California Actresses
Yale University
Childhood & Early Life
Jodie Foster was born in California to Evelyn Ella and Lucius Fisher Foster III. Her father was an U.S. Air Force lieutenant colonel who later turned into a real estate broker. Before Foster was born, her father left her mother.
Foster and her three siblings were brought up by her mother singlehandedly, who was a film producer. She attended the Lycee Francais de Los Angeles and before joining the Yale University to pursue literature, she made leisure trips to France. 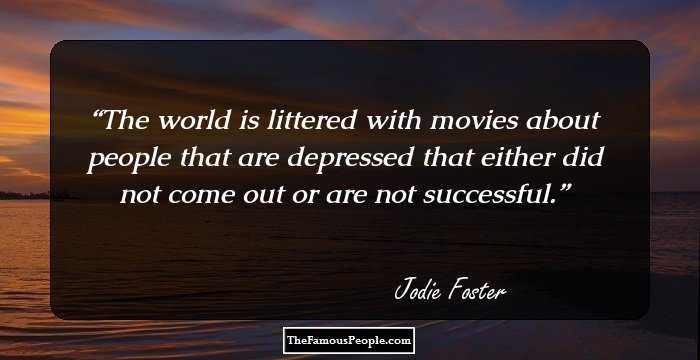 Continue Reading Below
Career
Foster started her career in the movies at the age of three. She starred as a ‘Coppertone girl’ in a television commercial and made TV debut in 1968, in the episode of Mayberry R.F.D.
In 1969, she appeared in episodes of ‘Gunsmoke’, ‘Daniel Boone’ and ‘The Courtship of Eddie’s Father’. In the following year, she debuted in the television movie, ‘Menace on the Mountain’, in which she worked with Martin Scorsese.
As a child artist, Foster appeared in many Disney movies, like, ‘One Little Indian (1973)’ and ‘Napoleon and Samantha (1972)’. In her teens as well she continued to work with the Disney movies.
As a teenager, she made appearances on the French pop music circuit as a singer. And she made her debut in music in France in 1977 and the songs she sang were used as soundtracks of her French movie, Moi, fleur bleue’.
In 1976, she acted in movies like: ‘Taxi Driver’, ‘Bugsy Malone’ and Freaky Friday’. Coincidently, for all of these movies Foster won awards like, British Academy Film Award and nomination for Golden Globe Award.
Foster’s movies as a grown-up artist were commercially and critically panned. With the release of ‘The Accused’ in 1988, she achieved the breakthrough in her career.
In 1991, she gave her first blockbuster with ‘The Silence of the Lambs’, starring opposite Anthony Hopkins. She received an Academy Award, Golden Globe Award and BAFTA Award for her brilliant performance in the movie.
In the same year, Foster made her directorial debut with ‘Little Man Tate’. Her directorial skills were critically acclaimed and in 1992 she started her production company ‘Egg Pictures’, Los Angeles.
During the early nineties, she starred in creative ventures like, Woody Allen’s ‘Shadows and Fog (1991)’, American Civil War drama ‘Sommersby (1993)’, Western comedy film ‘Maverick (1994)’ and ‘Nell (1994)’, for which she won a Screen Actors Guild Award.
Continue Reading Below
In 1995, Foster experimented with direction again and directed ‘Home for the Holiday’. She was honored with the Crystal Award by Women in Film for her excellent contribution in cinema, in the following year.
Foster acted for the first time in a science fiction film ‘Contact’ in 1997, starring opposite Matthew McConaughey. The next year an asteroid, ‘17744 Jodiefoster’, was named after her.
Foster’s biggest commercial success came with ‘Panic Room’ in 2002. She starred in the American thriller along with Forest Whitaker, Jared Leto, Kirsten Stewart, etc.
In 2004, after a gap of many years, Foster again ventured into French movies by appearing in a supporting role in ‘Un long dimanche de fiancailles ’. In the following year she gave out a worldwide hit, ‘Flightplan’.
In the mid-2000s, Foster did some big budget movies like, ‘Inside Man (2006), starring along with Clive Owen and Denzel Washington, ‘The Brave One (2007)’, for which she won a Golden Globe and ‘Nim’s Island’ with Gerard Butler.
Foster directed a black comedy, ‘The Beaver’, in 2011, starring Mel Gibson. The movie failed to get the revenue and received mild critical appreciation. In the same year, she acted in ‘Carnage’ and her acting performance earned her Golden Globe nomination.
Very recently, in 2013, Foster acted in second science fiction of her film career, ‘Elysium’, starring along with Matt Damon. 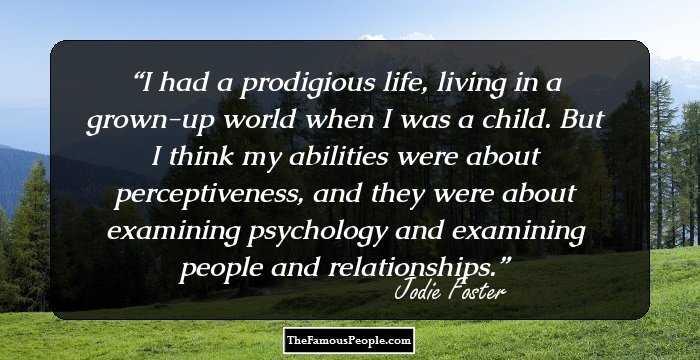 Quotes: Life
Major Works
The most prominent work of her career was delivered in the year 1976, ‘Taxi Driver’ (nominated for the Academy Award) and ‘Bugsy Malone’, which earned her two BAFTAs and ‘Freaky Friday’.
Continue Reading Below
‘The Silence of the Lambs’ in 1991 was a big hit. She portrayed the role of a FBI trainee, starring along with Anthony Hopkins. She received an Academy Award, Golden Globe and BAFTA for her performance.
Awards & Achievements
Foster has won four BAFTA Awards, two Academy Awards, three Golden Globe Awards, the Independent Spirit Award, the Saturn award, the People’s Choice Award and the Screen Actors Guild Award.
In 1996, she was honored with the Crystal Award by Women in Film for being an outstanding woman, with her brilliant efforts and natural talent, which helped to magnify the role of women in the entertainment industry. 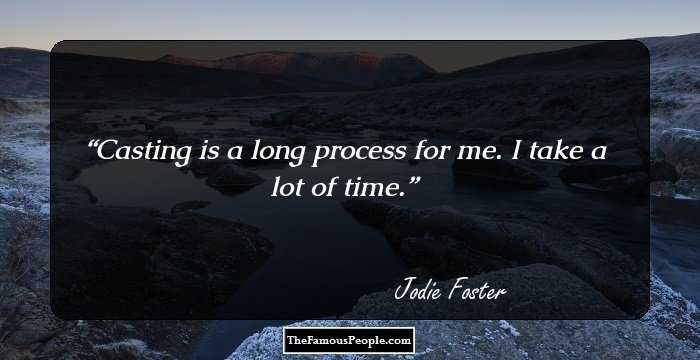 Quotes: Time
Personal Life & Legacy
Foster has always been open about her sexuality and is a lesbian. Her longtime partner was Cydney Bernard with whom she has two sons: Charles ‘Charlie’ Foster and Christopher ‘Kit’ Foster.
Trivia
Foster is great friends with actor Mel Gibson and mentions him as one of the people who ‘saved’ her.
This famous Hollywood actress is an atheist but is interested in all kinds of divine texts.
John Hinckley, Jr. was this famous actress' infamous obsessed stalker, who used to write her dozens of love letters and call her on the phone.

Quotes By Jodie Foster | Quote Of The Day | Top 100 Quotes

See the events in life of Jodie Foster in Chronological Order