Advanced Search
The little girl who charmed her way into the hearts of millions of fans around the world with her role in ‘Little Miss Sunshine’, Abigail Kathleen Breslin is now a beautiful young lady ready to take Hollywood by storm. The younger sister of another child star, Spencer Breslin, she followed her brother’s footsteps and began her acting career at the age of three! She first appeared in an advertisement for toys as a chubby three year old who melted the hearts of the viewers with her cuteness and innocence. Soon flooded with movie offers, she played the on-screen daughter of Mel Gibson in ‘Signs’, a role for which she received critical praise. She went on achieve greater success when she played a beauty pageant contestant in the movie ‘Little Miss Sunshine’. Not only was her acting much appreciated, but she was also nominated for an Academy Award for the Best Supporting Actress for this role—and she was just ten years old at that time! As someone who entered the world of show business while very young, the actress possesses a very high degree of confidence. Naturally talented and blessed with lovely looks, her popularity—and demand—continues to rise as she blossomed into a young woman. Madelyn Cline
14th April In History
DID WE MISS SOMEONE?
CLICK HERE AND TELL US
WE'LL MAKE SURE
THEY'RE HERE A.S.A.P
Quick Facts

American People
American Women
New Yorkers Actresses
Aries Actresses
American Actresses
Childhood & Early Life
She was born on April 14, 1996 to Kim and Michael Breslin in New York City where her father works as a telecommunications expert and computer programmer. She has two elder brothers, Spencer and Ryan.
Her brother Spencer is an actor and soon little Abigail too followed in his footsteps. Her acting career began when she was only three years old. 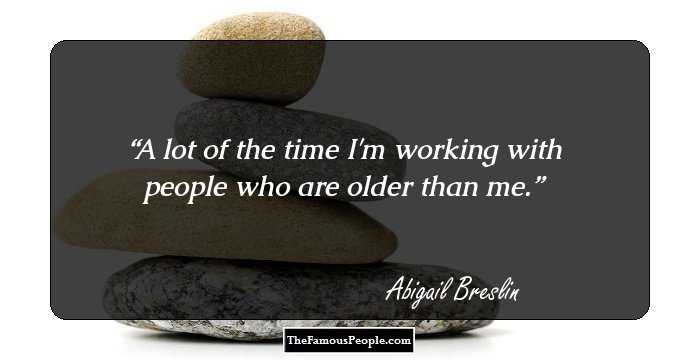 Continue Reading Below
Career
Her first on-screen appearance was in a Toys “R” Us commercial in which she appeared as a cute little toddler at the age of three.
She was noticed for her good looks and confidence and soon film offers started pouring in. Her mother became her manager and started selecting roles for her.
In 2002, she made her feature film debut with a role in the Night Shyamalan science fiction thriller, ‘Signs’ where she played Bo Hess, the reel-life daughter of the character played by Mel Gibson.
She became popular following the success of ‘Signs’ in which she got noticed for her confidence and acting skills which were commendable for someone so young. She appeared in the film ‘Raising Helen’ in 2004, but the film did not do well.
She portrayed Kira Bedik in the drama film ‘Keane’ (2004) which deals with the story of a mentally challenged man whose daughter was abducted. The film was set in New York City and premiered at the Telluride Film Festival.
In 2005, she acted in the made for television movie, ‘Family Plan’ which focuses on the story of a woman who brings home a fake husband and fake daughter to pretend like a family oriented woman.
The year 2006 was a great one for the young Abigail as she was selected to play Olive Hooper in the comedy drama ‘Little Miss Sunshine’. The girl was just ten years old at that time, but the maturity with which she played the role earned her rave reviews.
Abigail made her stage debut in 2007 with the play ‘Right You Are (If You Think You Are)’ in New York City at the Guggenheim Museum. She was part of an ensemble cast which also had Cate Blanchett, Dianne West and Natalie Portman.
She played Kit Kittredge in the 2008 comedy drama ‘Kit Kittredge: An American Girl’ which is about a girl Kit who lives during the Great Depression. The series was based on a series of stories by Valerie Tripp.
In ‘My Sister’s Keeper’ (2009), she plays a girl who is conceived by her parents as a potential organ donor for her elder sister who is suffering from cancer. Though the film received mixed reviews, it did well at the box office.
In 2013, she played a girl who is kidnapped by a serial killer in the crime thriller ‘The Call’. The movie went on to be a big hit and surpassed its expected revenues by a huge margin. 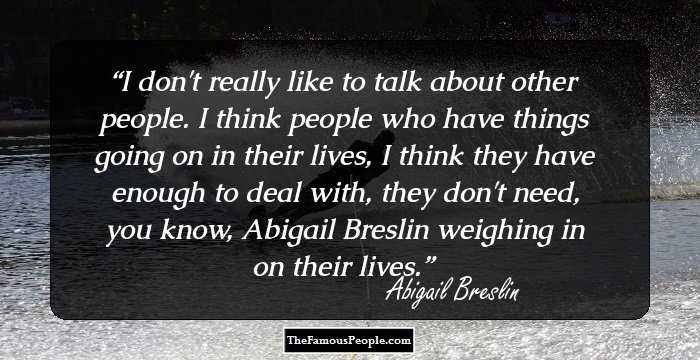 Major Works
Her role of Olive Hoover in the comedy drama ‘Little Miss Sunshine’ in which she plays a girl hailing from a dysfunctional family who wishes to participate in a beauty contest for kids. Her role was critically appraised and she won several awards and nominations for her acting.
Awards & Achievements
She won the Iowa Film Critics-Best Supporting Actress Award for her portrayal of Olive Hooper in ‘Little Miss Sunshine’ in 2007. The Tokyo International Film Festival-Best Actress Award was also bestowed upon her for this role. This role won her a nomination for the Academy Award for the Best Supporting Actress. 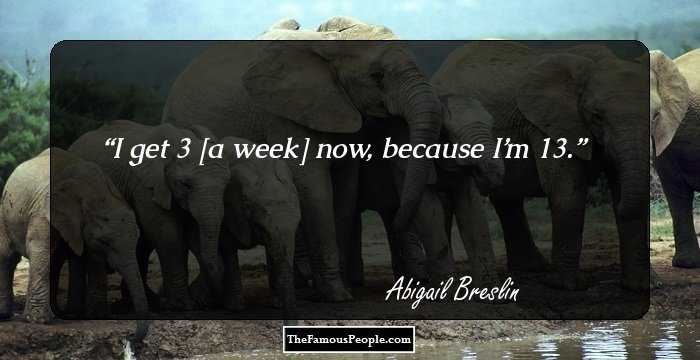 Personal Life & Legacy
She is one of three siblings, and the only sister to Ryan and Spencer. She has acted along with her brother Spencer who is also an actor, portraying on-screen siblings in the film, ‘Raising Helen’.
She has been romantically linked to All Time Low's backup vocalist Jack Barakat.

Quotes By Abigail Breslin | Quote Of The Day | Top 100 Quotes

See the events in life of Abigail Breslin in Chronological Order