Not many black actresses can claim to have as flamboyant and successful a career as Whoopi Goldberg. A star in her own right, she is one of the 14 entertainers ever to have an Emmy, Grammy, Oscar and Tony in her kitty, a feat that select few can boast of. What differentiates Goldberg from her contemporaries is the excellence that she portrayed in all the mediums of entertainment, be it television, theatre, films or radio. She created history by becoming the first African-American woman to win the Academy Award for best supporting actress in nearly 50 years. Furthermore, she is only the second African-American actress to win an Academy Award for acting. In her career which spanned across three decades and more, she has served as an American comedian, actress, singer-songwriter, Broadway star, political activist, author and talk show host. But did you know that Goldberg suffered from dyslexia during her early years? She also overcame drug addiction to achieve the high profile star status that she enjoys today. Her prolific career is filled with some impressive performances in films and television. 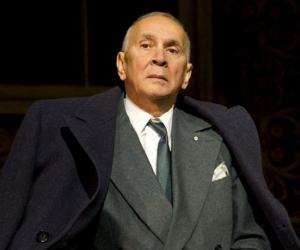 American People
Talk Show Hosts
Stand-up Comedians
American Women
New Yorkers Actresses
Childhood & Early Life
Whoopi Goldberg was born as Caryn Elaine Johnson to Emma and Robert James Johnson in Manhattan. Her mother was a nurse and a teacher while her father served as a clergyman.
She was raised in the Chelsea-Elliot Houses by her mother alone after her father disbanded the family when she was young. She studied until her teen years and later dropped out of school.
Her tryst with acting started young. It was during her stage performance that people complimented her by saying that she looked like whoopee cushion. It was from there that she took the stage name Whoopi and adopted Goldberg as her surname to sound more Jewish. Her stage name, Whoopi Goldberg stayed with her for the rest of her life. 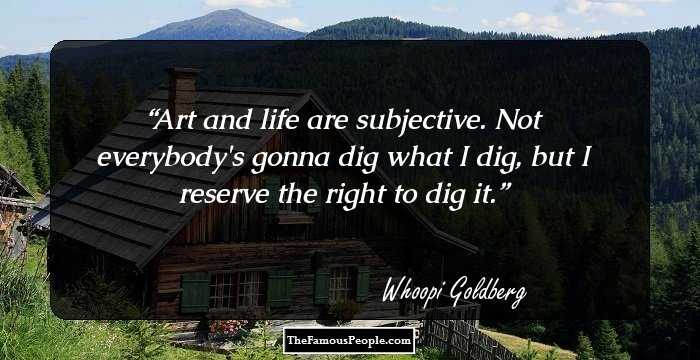 Quotes: Life, Art, I
Continue Reading Below
You May Like

Famous Beautiful Women With Green Eyes
Career
In 1974, she moved to California and thereafter lived in various cities such as Los Angeles, San Diego and San Francisco. It was during this time that she honed her acting skills and developed her talent as a stand-up comedienne.
Her first shot to fame was as a comedienne Mos Mabley in a one-woman show. She won an award for the same.
Soon, thereafter, she returned to New York and started receiving training under acting coach Uta Hagen. Her first ever appearance on screen was for William Farley’s feature, ‘Citizen: I'm Not Losing My Mind, I'm Giving It Away’
In 1983, she created, starred and directed the one-woman show, ‘The Spook Show’. The show addressed the issue of race in American but in a unique and innovative style. The show was much liked by the audience.
Following the success of ‘The Spook Show’, she created other off-Broadway productions such as ‘Little Girl’ an African-American child obsessed with having blond hair and ‘Fontaine’ a junkie who also happens to hold a doctorate in literature.
The innovative presentation and sense of wit and style in her shows impressed director Mike Nicholas who offered to take ‘The Spook Show’ to the Broadway. The show which ran for 156 performances, met with much acclaim both commercially and critically. It went on to earn her a Grammy Award for Best Comedy Album.
The eye-catching performance and amazing positive reception of the show earned her attention of the Hollywood bigwigs. It helped her bag a role in the Steven Spielberg film, ‘The Color Purple’, released in 1985. The movie met with resounding success, clutching 11 Academy Awards nominations and her first Golden Globe award.
‘The Color Purple’ served as the big breakthrough and helped launch her career in a grand way. It was followed with a couple of movies such as ‘Jumpin’ Jack Flash’, ‘Burglar’, ‘Fatal Beauty’, and ‘The Telephone’. While all the films were modestly successful, none of them matched the glorious success of her previous venture.
She ended the 1980s decade with ‘Clara’s Heart’ released in 1988 and ‘Homer & Eddie’ in 1989. Both the films were critically successful. Other than films, she also featured in HBO specials of Comic Relief.
Continue Reading Below
She started the 1990 decade by starring in the sit-com ‘Bagdad Cafe’. Later, she followed this up with ‘The Long Walk Home’ and ‘Ghost’. While in the former she portrayed the role of a woman in civil rights movement, in the latter she played a psychic, a role which earned her, her first Academy Award and second Golden Globe.
She followed this up with the films, ‘Soapdish’, ‘The Player’, ‘Sister Act’, ‘Sarafina!’, ‘Made in America’ and the sequel, ‘Sister Act 2: Back in the Habit’. She was also seen playing Guinan in ‘Star Trek: The Next Generation’ a role which she reprised in two Star Trek movies.
Other than starring in the movies, she launched herself on television with her flagship talk show, ‘The Whoopi Goldberg Show’. The format of the show had her taking one-to-one interview with political VIPs and Hollywood big shots. The show continued for 200 episodes before being terminated.
In 1994, she created history by becoming the first African-American female to host the Academy Awards show. She repeated the feat in 1996, 1999 and 2002.
Around this time, she was seen in numerous films such as ‘Corrina, Corrina’, ‘Boys on the Side’, ‘Moonlight’, ‘Valentino’, ‘Bogus’, ‘Eddie’, ‘The Associate’ and ‘Ghosts of Mississippi’
Other than acting, she also ventured into the world of books and co-wrote a book along with ghostwriter Daniel Paisner titled, ‘Book’. It contained a collection of stories, featuring insights and opinions.
Her 1998 appearance on the celebrity game show, Hollywood Squares earned her two consecutive Emmy Awards.
From 1998 to 2001, she appeared in several supporting roles in ‘How Stella Got Her Groove Back’, ‘Girl’, ‘Interrupted’, ‘Kingdom Come’ and ‘Rat Race’. Additionally, she appeared in television and film ventures such as ‘The Magic Schoolbus’, ‘Cinderella’, ‘A Knight in Camelot’ and ‘Call Me Claus’
In 2004, she returned to Broadway to star in a self-titled one-woman show.
Continue Reading Below
Her career zoomed up again in 2007 when she served as the moderator and co-host of daytime talk show ‘The View’. Though the show did not have as big a start as during the time of Rosie O’Donnell, it soon picked up and moved past the latter.
Meanwhile, from August 2006 to March 2008, Goldberg hosted ‘Wake Up With Whoopi’, a nationally syndicated morning radio talk and entertainment program. In the recent years, she has curtailed her acting and has been an active human rights activist.
Lately, she has guest starred as Jane Marsh in the TV series, ‘The Middle’. She also played a role in the independent short film ‘Indecisive’. 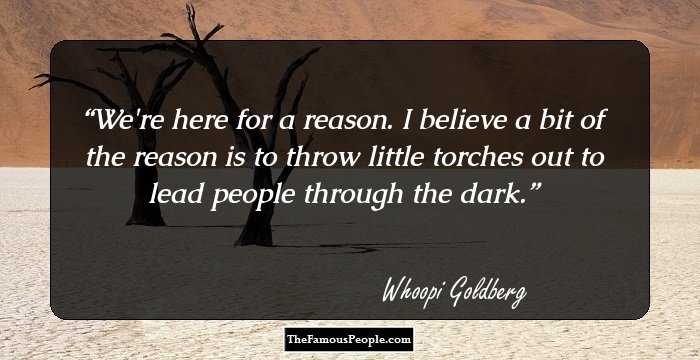 Quotes: Believe, I
Awards & Achievements
She has won several awards during her glittering career. These include: two Daytime Emmy Awards, one Academy Award, two Golden Globe Awards, one Grammy Award, a Tony Award, three People’s Choice Award and five American Comedy Awards.
Additionally, she has received the Gay and Lesbian Alliance Against Defamation Vanguard Award, the prestigious Mark Twain Prize for American Humor at the Kennedy Center as well as the Women in Film Crystal Award.
She was named the Black Entertainer of the Year by the National Association for the Advancement of Colored People in 1990. Same year, she was credited with the Excellence Award at the Women in Film Festival.
Personal Life & Legacy
She has thrice been married and divorced till date. First marriage was with Alvin Martin with whom she has a daughter. After separating from him, she married David Claessen but the unison did not last long and later went into the wedlock with Lyle Trachtenberg. They separated after a year.
She has been in a romantic relationship with a couple of men including Frank Langella and Ted Danson.
She has admitted to being a ‘high functioning’ drug addict initially. She also suffered from dyslexia.
She has been active supporter of gay and lesbian rights. She has worked for transgender and bisexual community and raised awareness about AIDS 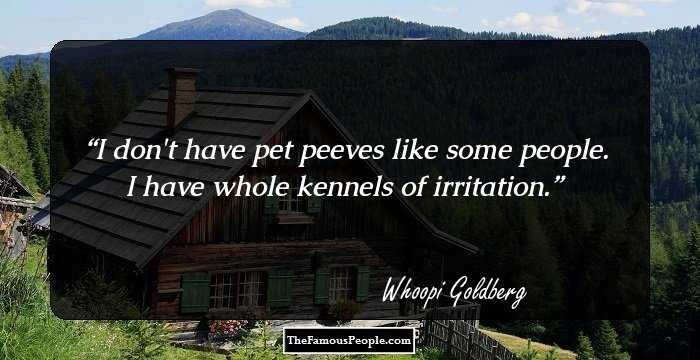 Quotes By Whoopi Goldberg | Quote Of The Day | Top 100 Quotes

See the events in life of Whoopi Goldberg in Chronological Order