Fred Goodwin is a Scottish chartered accountant and a former Chief Executive Officer of the Royal Bank of Scotland Group. Born and raised in Renfrewshire, Scotland, Fred comes from a lower middle class family. Before him, no other member of his family had ever studied in college. In 1983, he became a Chartered Accountant and worked on several positions until 1990 when he got his first big break. He was assigned by the British Government with the task of preparing the largest Northern Irish industrial employer, Short Brothers, for privatization. He came to international prominence when he was offered the position of CEO of the Royal Bank of Scotland Group in 2001. He became famous as he led the charge of making RBS into one of the world’s most profitable private sector banks. Following a huge loss and failure of RBS, Fred resigned from his position. He was knighted in 2004 for his services but his knighthood was taken back from him in 2012. The cabinet office cited his role in the failure of RBS as the reason for this ‘exceptional case.’ Peter K. McMahon
CEOs #357
Business People #1376
DID WE MISS SOMEONE?
CLICK HERE AND TELL US
WE'LL MAKE SURE
THEY'RE HERE A.S.A.P
Quick Facts

British People
Scottish People
Scottish Men
British CEOs
Leo Entrepreneurs
British Entrepreneurs
Childhood & Early Life
Fred Goodwin was born Frederick Anderson Goodwin on August 17, 1958, in Renfrewshire, Scotland, to an electrician father and a homemaker mother. He hailed from a middle class family and before him none of his family members had attended college.
Fred was raised in the Ferguslie Park region and attended a local grammar school. Just after his high school education, his family shifted to Glasgow. Fred attended Glasgow University to resume his further studies.
Fred studied law at the university but wanted to become a chartered accountant. He qualified as a chartered accountant in 1983 and started working at Touche Ross.
Continue Reading Below
You May Like

Who Is The Most Popular BTS Member?
Early Career
Fred was hired by Touche Ross immediately after he became a certified CA. In 1985, Touche Ross made him a part of the management consultant team that handled the Rosyth Dockyard. In 1988, he was made a partner in Touche Ross Company.
A huge aerospace company known as Short Brothers was looking to go private in the late 1980s and Fred was given the job of preparing the company for privatisation. To do the job freely, he was made president of the company.
He first entered the world of banking while working with Touche Ross, where he was sent to work as a company representative to work for the National Australia Bank. The NAB was impressed with Fred’s work in helping them taking over Clydesdale and Yorkshire banks.
In 1995, Fred was invited to become the deputy chief executive of the Clydesdale bank. Fred was famous for his ‘5 seconds rule’, according to which he took decisions in 5 seconds and he took the offer. While working with Clydesdale, he also earned a moniker ‘Fred the Shred’ owing to his abilities of ruthlessly generating cost saving efficiencies by usually unconventional means.
Royal Bank of Scotland
In 1998, Fred was offered the job as deputy CEO of the Royal Bank of Scotland, working alongside the then CEO George Mathewson. George had big intentions of making RBS into some sort of a major international player, rather than a mere bank. He perpetrated the takeover of NatWest, a bank which was three times bigger.
Although the takeover process was started by George, it was Fred who showed ability to impress the investors which led to the takeover successfully taking place. Bank of Scotland was also eying NatWest but Royal Bank of Scotland emerged the victor.
In January 2001, Fred was finally promoted to the position of the CEO of RBS and immediately, he cut about 18,000 jobs as the first thing he did as a CEO was merging NatWest and RBS.
Following the takeover of NatWest and Fred becoming the CEO, Royal Bank of Scotland went on a spree to acquire many other financial institutions such as First Active, Churchill Insurance and Direct Line. Over the next couple of years, RBS extended its range of operations and entered the US market.
In 2004, RBS took over Charter One Financial Inc. based out of Cleveland, Ohio. The deal was finalised in $10.5 million and it was considered to be very costly. But somehow, Fred knew that if they wanted to expand their business in the lucrative American Midwest, the deal needed to be done. The company was hence successful in making itself the 7th largest company in the US in banking operations.
Continue Reading Below
In the first five years after Fred took over as CEO, the assets of RBS quadrupled. With most of the profit coming from investment banking, RBS registered heavy profits.
In 2005 however, Fred faced some criticism from RBS board as they claimed that Fred was focusing more on global expansion rather than focusing on the short term goals. It was after Fred attempted to buy a minority stake in the Bank of China. He promised his shareholders that he would stay away from more acquisitions and will focus on company’s organic growth.
However, Fred’s policies of ruthless takeovers proved to be risky in 2008 during the international recession. RBS faced a big liquidity crisis which resulted in the bank incurring heavy losses. The government ended up buying majority of shares in the RBS and this did not sit well with Fred. He officially resigned from the post of CEO on January 1, 2009.
Fred was often criticized by the media and his own shareholders as he liked to spend huge amounts of money on luxuries. It was also reported that while Fred was still the CEO, RBS had registered a loss of 24.1 million pounds, which was considered to be the biggest loss in the history of UK.
It was also reported by The Guardian’s Julia Finch that about 25 people, including Fred, were responsible behind the global financial crisis of the 2007-08.
On the issue of his pension, RBS conducted an internal inquiry on Fred and found him to be clean. His pension, after much negotiation, was settled at 342,500 pounds per year.
Awards & Honours
Fred Goodwin received Knighthood in 2004 for his exceptional services to the banking industry. However, following the enormous failure of Royal Bank of Scotland during last few months in Fred’s term as the CEO, he had his knighthood annulled by the Queen on the advice of Her Majesty’s Government.
In 2002, Forbes Magazine honoured him with the Businessman of the Year title. In 2003, he was named European Banker of the Year.
He has also been honoured with a honorary doctor of Laws by the St Andrews University and an honorary fellowship by the London Business School.
Family & Personal Life
Fred Goodwin married Joyce McLean in 1990 and the couple have two children. In 2011, his wife asked him to leave the house due to his extra marital affair. The media also highlighted Fred’s affair with a Royal Bank of Scotland employee.
In his free time, Fred likes to restore vintage cars. His love for cars also reflects in his love for Formula One. He also plays golf in his free time.
You May Like

See the events in life of Fred Goodwin in Chronological Order 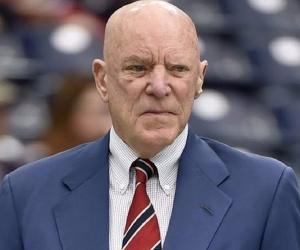