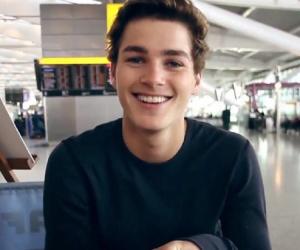 Someone once said, “Travelling, leaves you speechless and then turns you into a storyteller”. A lot of youngsters are now resorting to travelling, in an effort to become one with one’s soul. Finn Harries too is one such youngster who travels like a freak. He is the Co-owner of an immensely YouTube Channel ‘JacksGap’. The channel basically publishes videos that show their journey while spreading awareness about a certain cause. Their official site says that in 2013, they travelled through various parts of India in three rickshaws to spread the word about, ‘Teenage Cancer Trust’ and raise as much money as they can for it. The campaign did show some beautiful results and they rose close to $180,000 in about six weeks. The kinds of people they meet during this journey and their travel experiences are all recorded and then put up as clips on their site. They call it, “A storytelling project inspired by travelling”. It is a beautiful way of reaching out to people, and Finn Harries along with his twin, Jack are doing their part in making this world a better place to live in. Scroll down to know more about our very own, Finn harries.

British Men
Male Youtubers
Taurus Youtubers
British Vloggers
The Meteoric Rise To Freedom
Finn Harries comes from an extremely humble and a down-to-earth family where both his parents are into films and productions. He studied architecture design as a regular day scholar. Even while he was a student he was very concerned about the environment and believed that it was the responsibility of his generation to take efforts to protect the environment. It was this cause apart from others and his huge love for travelling that he smartly combined into one forum. He and his twin brother together built a successful YouTube channel where they filmed their travel journeys while telling a story to the world for a substantial cause. ‘JacksGap’, the YouTube channel was started in the year 2011 and slowly and steadily Finn worked his way through success. The channel now has over 4 million subscribers on the YouTube, emphasizing on the fact, that the role it plays in the life of the youth today is immense. He is also a huge star on twitter and has over 2 million people following him on his twitter handle and about 1.8 million fans on Instagram. Such a huge fan following only goes to prove that he is looked upon as an icon and the youth of today want to be like him.
Recommended Lists:

The Sexiest Men Of 2020, Ranked
Continue Reading Below
What Makes Finn Harries Special
Apart from being a You-tuber, Finn is extremely concerned about the environment and believes that his generation is the last which can help save this environment. He says, “I’ve grown to understand that the society and culture I was born into is damaging the planet we live on at a greater scale than ever before.” It is this care and concern he has for the world that makes him so loved among his fans. There was a time when there were no videos posted on the channel and fans went berserk saying, “Please come back, your videos truly gave me so much comfort and inspiration” and “I always come back to this channel to see if they've posted something ... guess not :(“ among the many other comments. These posts from people show how much he means to the people out there.

Beyond Fame
Finn Harries loves to travel and has been to places like Istanbul, Tokyo and Orleans among the many others that he has visited. He also loves animals and has done a couple of videos on them. His fondness for animals shows that he is a very compassionate person and is a very warm person. Despite being a superstar in the world of YouTube, he has absolutely no airs about himself and hence is a very relatable personality.

Behind The Curtains
Finn Harries was born on May 13, 1993 to British parents who were both in the film industry. This Tauran youtuber also has a twin brother called Jack harries who is 2 minutes younger to him. Based on the way they talk to each other in their clips and the vibes they give out, both these identical twins share a fantastic rapport and are probably the best of buddies.