Advanced Search
Faith Ringgold is a famous artist and writer of African-American origin. She well-known for introducing her own forms of art such as soft sculpture, masks and story quilts. She was the first female artist to give sewing, fabric, weaving and embroidery the transformation from craft to some serious subject of art. Being a victim of the racial discrimination in personal as well as professional life, she used her talent to propagate her life as well as the harm this evil brought to the society at large. Her work as an artist cum social activist was mainly aimed at fostering racial unity especially in the New York art fraternity. Her effort to get away with the stereotypes of black culture is clearly evident in the political and feminist issues she has depicted in her work especially through her paintings and quilts. Faith has almost 75 awards to her credit including the honorary doctor of fine arts. Having written a number of books for children, she is presently a faculty at the University of California. Tom Franco
DID WE MISS SOMEONE?
CLICK HERE AND TELL US
WE'LL MAKE SURE
THEY'RE HERE A.S.A.P
Quick Facts

Founder/Co-Founder: Where We At

American People
Black Artists & Painters
American Women
Women Artists
American Artists
Early Life
Faith Ringgold was born as Faith Willie Jones on October 8, 1930 in Harlem Hospital in New York City as the youngest child in the Jones family.
Her father Louis Jones was a truck driver while her mother Willi Posey Jones worked as a fashion designer. Her parents managed to earn just enough to meet the basic necessities of their three children.
Faith could not be regular at primary school due to health issues. Being asthmatic, she spent a major part of her childhood in hospitals or at home and during this phase she developed love for drawing.
While in second grade, she became a class artist and one of the favorites of her school principal too. She enrolled in the City College of New York to study art in 1950 wherein she completed her B.S. in 1955 and M.A. in 1959.
Being and an African-American, Faith could not avoid being a victim of racism but her determination and perseverance helped her sustain it too. 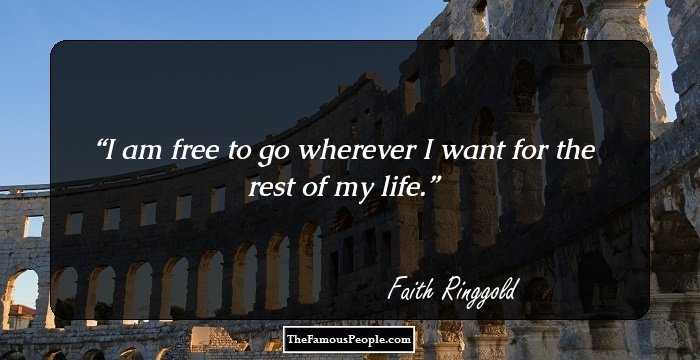 Quotes: Life, I
Continue Reading Below
Career
Post graduation, Faith worked as an arts faculty in the New York City School, Wagner College and the Bank Street College of Education during 1960 and 1970s.
Faith promoted African art in college and also taught about jewelry, clothing and beadwork.
It was after her post graduation in fine arts in 1961 that she shifted to Europe to learn more about Picasso, Matisse and other artists.
Faith’s inclination towards political issues and women exploitation increased as a result of the Civil Rights Movement.
Her anger was clearly evident in the paintings she made during 1960s like the American People and the mural, The Flag is Bleeding. She also worked on the painting reflecting female rape victims in 1970.
This drew inspiration majorly from the works of writers, James Baldwin and Amiri Baraka who wrote about the blacks and their struggle with the Americans.
Her painting, the ‘U.S. Postage Stamp Commemorating the advent of Black people’ was in a grid form of 100 human faces that depicted the ratio of African-Americans in the overall population.
The American Art Museum which also ill treated the African-American artists further agitated Faith and she realized that this was the reason for non existence of African artists in European art.
Faith began to show the world her own and her community’s suffering through her own ways and started with mask making and head making in 1970s.
Continue Reading Below
With the help of her mother, Faith got involved with full size portraits of famous people like politician Adam Clayton Powell, Wilt Chamberlain, basketball players and others coming from Harlem thereby calling it as ‘The Harlem Series’.
Faith also promoted women handicraft through narrative quilts that depicted a series of pictures along with descriptions that narrated stories of the same. These quilts evolved from the art of weaving that was introduced by African slaves in America.
Apart from their basic purpose of providing warmth, they began to be used as memoirs and later as message boards.
‘Echoes of Harlem’ was her first quilt in 1980 and today she has 30 quilts to her credit which are written in the form of children stories wherein each part of the quilt is a page.
Some popular quilts by Faith are ‘Who’s Afraid of Aunt Jemima?’, which depicted the life of an African woman who went on to become a successful business women and ‘Street Story’. Later on she also worked on giving live performances along with these quilts.
Despite living in New York, Faith’s work was always far from the contemporary American art mainly because her subject was only black culture and the racial discrimination.
Apart from being an artist, she is also known for her social activism. She fought for the rights of the African artists at the Whitney Museum of American Art in New York through the Ad Hoc Women’s Art Committee (founded by artist Poppy Johnson and art critic, Lucy Lippard).
At present, she works as a professor of art at the University of California at San Diego.
Awards & Achievements
Faith along with some acquaintances has been successful in finding organizations like Women Students and Artists for Black Art Liberation (WSABAL) in 1970, National Black Feminist Organization in 1974, “Where We At” Black Women Artists (a women art collective in New York)
Continue Reading Below
Her involvement is various protests helped her display her work too. She became the first black woman to hold shows single handedly at The Spectrum Gallery in New York in 1967 and 1970.
The Rutgers University (1973) and the Studio Museum in Harlem and the College of Wooster Art Museum (1985) honored her as a subject of 10- year retrospective exhibition and 20 –year retrospective exhibition respectively.
Faith was honored with awards like Simon Guggenheim Foundation Award (1987) and the Moore College of Fine Art’s Honorary Doctorate Award (1986).
Her work has been depicted in various museums all over the world such as Guggenheim Museum, the Museum of Modern Art and the Metropolitan Museum of Art in New York.
Her books, Tar Beach and Aunt Harriet’s Underground Railroad in the Sky were published by the Crown Press in 1991 and 1992 respectively. Tar Beach draws inspiration from her childhood in Harlem – it became a Caldecott Honor Book for which Faith was honored with the Coretta Scott King Award.
Various artists such as Linda Freeman, Romare Bearden, Betye Saar have been known to be drawing inspiration from Faith Ringgold.
Personal Life & Legacy
Having suffered from asthma during childhood, Faith spent a lot of time with her mother who taught her various art forms during her early childhood, hence the love for art developed.
Post her mother’s death in 1981, she delved into quilting as a tribute to her mother. The tradition of weaving continued from her great grandmother’s (Susie Shannon) time in their family which Faith has kept alive till date.
She got married in 1950 to Robert Earl Wallace who was a jazz pianist. The couple, however, later divorced in 1956. She had two daughters Barbara and Michele from this marriage.
Faith remarried Burdette Ringgold on May 19, 1962.

See the events in life of Faith Ringgold in Chronological Order