Advanced Search
ExplodingTNT is the online alias of Canadian YouTube gamer and game commentator Samuel who is primarily known for making Minecraft machinimas and trolling videos. His machinimas contain in-depth plot and character development, and follow his ongoing feud with the character of Pink Sheep, a god-like sheep with a mustache, which has its own YouTube channel. His Minecraft character is a TNT mouse with a red and white TNT hoodie, which pretends to be a noob. His skits often follow a similar structure as he posts videos on hypothetical situations within the game. For example, some of his top viewed videos are, ‘If Lava and Water Switched Places – Minecraft’, ‘If Diamonds and Dirt Switched Places – Minecraft’, ‘If Wood was Rare – Minecraft’ and ‘If Diamonds and Wood Switched Places – Minecraft’. In one of his popular series, ‘If Famous People Played Minecraft’, he was banned by American President Donald Trump. He has launched the official ExplodingTNT Store online at ExplodingTNTStore.com, which exclusively sells ExplodingTNT merchandise with four designs at the moment: ExplodingTNT, PinkSheep, President PinkSheep, and Mustache T-shirts. On September 13, 2017, he published the satirical children's book 'ExplodingTNT Vs. Everything', subtitled 'An Unofficial YouTube Minecrafter's Adventure', detailing the fictional journey of his Minecraft persona. Canadian People
Male Youtubers
Pisces Youtubers
Canadian Gamers
Canadian YouTubers
Rise to Stardom
ExplodingTNT was interested in making YouTube videos as early as 2007 when he had created a number of YouTube accounts to test out different types of videos covering various content types that he wanted to create. Thankfully, it did not take him long to discover his love for making Minecraft-related content, which provided him early exposure to the overcrowded community and allowed him to grow as a YouTuber. His earliest YouTube videos primarily saw him recording videos of him exploding massive amounts of TNT in the game, which justified his online alias at the time. However, it became monotonous and repetitive after about eight months, following which he was forced to look for inspiration for new content to keep his viewers hooked.
Recommended Lists:

Pisces Men
He watched videos of other popular Minecraft YouTubers of the time and learned that short funny skit videos were in demand. He himself enjoyed watching those, and decided to create similar content for his subscribers. Since then, he has been uploading weekly skit videos on a regular basis. By 2014, he had become the number one Minecraft machinima channel for skits on YouTube. He has been making weekly skits regularly for years now and has increased output from one video per week to 3-4 videos each week. Due to popular demand, he later started playing Roblox, another game similar to Minecraft, with the help of Pink Sheep.
Continue Reading Below
What Makes ExplodingTNT Special
Talking about his motivation for making videos continuously, ExplodingTNT mentioned that it sometimes gets tough due to negative comments and decreasing viewership, but his biggest motivation is meeting new people through his YouTube channel who share a similar interest and keep them entertained. While he acknowledges that his channel is "one of the many Minecraft YouTube channels that have taken over the internet", he consciously tries to keep his content original and interesting. His videos are based on the various different things that can be done within the game, but his entertaining online character, his comic commentary and storyline adds the necessary spin make his videos stand out.
He admitted that he was aware that YouTube could become a regular source of income right from the early days, but according to him, that was never his primary motivation. However, it was around 2013 when he first realized the potential of his channel after it gained a whooping 700k subscribers throughout the year following a sudden boom in viewership. He now has over 4.5 million subscribers to his channel and YouTube has become his primary job. He collaborated with several other Minecraft YouTubers such as SkyDoesMinecraft, JeromeASF, DanTDM, Failboat and GameplayerHD. Along with GameplayerHD, he owns the Minecraft mini-game servers McOrigins and The Nova.
Face Reveal
ExplodingTNT, who created his YouTube channel while he was still in school, did not want his peers to know about his online fame. As a result, he kept his identity a secret and did not reveal his face to his fans either. However, even after completing his education, his fans only know his real name so far. He mentioned that he intends to reveal his face eventually, and is supposed to do that after reaching 10 million subscribers. At his current subscription rate, it might take him 6 to 7 years, or even more if Minecraft’s popularity declines steadily and he fails to raise the quality of his content.
Behind The Curtains
ExplodingTNT, real name Samuel, was born on February 20, 1997 in Toronto, Canada. He went to school in Ontario. His family is very supportive of his online ventures. 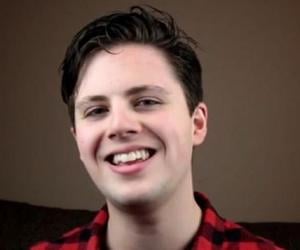