Brian Lara, popularly known as the 'Prince of Trinidad' and 'Prince of Port of Spain', is a legendary cricketer who played for the West Indies. The left-handed batsman gained prominence for playing big knocks and holds many records, including the highest scorer in both an international Test inning (400 not out) and in a first-class inning (501 not out). He is among the seven players who have scored more than 10,000 runs in both Test and One Day Internationals. He was the top scorer in Tests before Sachin Tendulkar overtook him. He has a total of 53 centuries (34 Test and 19 ODI) under his belt. Lara, who also led his team in several matches, held the record for scoring most Test double centuries as a captain (five), before Virat Kohli surpassed him in 2017. Bowling legends like Muttiah Muralitharan and Glenn McGrath considered him the most dangerous batsman to bowl to. He is an honorary member of the Order of Australia. 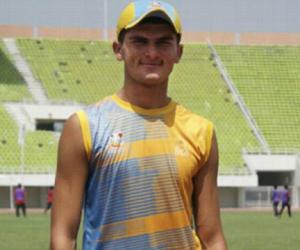 Imran Khan
Cricketers #11
Sportspersons #325
DID WE MISS SOMEONE?
CLICK HERE AND TELL US
WE'LL MAKE SURE
THEY'RE HERE A.S.A.P
Quick Facts

awards: Wisden Cricketer of the Year

Trinidadian People
Male Sportspersons
Trinidadian Cricketers
Trinidadian Sportspersons
Taurus Men
Childhood & Early Life
Brian Charles Lara was born on May 2, 1969 in Santa Cruz, Trinidad and Tobago, to Bunty Lara, an employee of the Ministry of Agriculture, and his wife Pearl. He was born at number 10 among his parents' 11 children.
When he was six, his father and older sister Agnes Cyrus enrolled him in the local Harvard Coaching Clinic where he trained every Sunday. He first studied at St. Joseph's Roman Catholic Primary School and later attended San Juan Secondary School on Moreau Road, Lower Santa Cruz.
At 14, he transferred to Fatima College in Mucurapo where he received training from coach Harry Ramdass. After scoring 745 runs at an average of 126.16 per inning in a schoolboys’ tournament, he was selected for the Trinidad national under-16 team at the age of 14. He played in his first West Indian under-19 youth tournament at 15.
Continue Reading Below
You May Like

Who Is The Greatest Female Warrior In History?
First-Class Career
Playing in the West Indies Youth Championship in 1987, Brian Lara scored 498 runs and broke the previous year's record of 480 runs by Carl Hooper. The same year, he helped the Trinidad and Tobago team win a tournament with his crucial 116-run knock.
He made his first-class debut for Trinidad and Tobago against Leeward Islands in the Red Stripe Cup in 1988, and scored 92 runs in their second match against Barbados. Later that year, he led the West Indies Under-23s team to the semi-finals of the Bicentennial Youth World Cup in Australia and scored 182 runs against India.
In 1989, he had to forego an opportunity to play for the West Indies cricket team due to his father's death. The following year, he won the Geddes Grant Shield ODI championship as the youngest caption of Trinidad and Tobago at 20.
International Career
On November 9, 1990, Brian Lara made his ODI debut for the West Indies cricket team against Pakistan and scored 11 runs. A month later, on December 6, 1990, he made his international Test debut also against Pakistan and scored 44 and 5 runs respectively.
During the West Indies and Australia series in January 1993, he scored his maiden Test hundred (277), which turned the series in his team’s favor by 2-1. In 1994, while playing against England, he set the record for scoring the highest Test runs in an inning with his knock of 375. Not long after, he set a similar record in first-class cricket by scoring 501 runs unbeaten for Warwickshire against Durham, which continues to be the highest score in first-class cricket.
During a Test series against England in 1995, he scored three centuries in consecutive matches, but the series tied at 2-2. In 1998, Lara was appointed the captain of the West Indies, following which they suffered a complete whitewash against South Africa.
He was briefly removed from captaincy due to players revolting over payment issues, but was reinstated in 1999 before the four-match Test series against Australia. While the series was drawn at 2-2, Lara was named ‘Man of the Series’ for his three centuries, including a double hundred.
During the Carlton ODI Series in Australia in 2001, Lara registered a batting average of 46.50 with one century and two half-centuries. Later that year, during their three-match Test series against Sri Lanka, he scored a total of 688 runs with three centuries, including a double hundred.
He returned as the captain of his team during Australia's tour to the West Indies in 2003. He scored 110 runs in the first Test but his team lost the match and the series. Under his captaincy, however, the West Indies won their two-match series against Sri Lanka in 2003, and the ICC Champions Trophy in England in September 2004.
Continue Reading Below
His knock of 375 remained the top individual Test score for nearly a decade until Matthew Hayden scored 380 against Zimbabwe in 2003. However, the next year, Lara reclaimed his record with a knock of 400 not out against England. With his 400, he became the second batsman to score two Test triple-centuries after Don Bradman.
He declined to play in the first Test during their home series against South Africa in March 2005. He did so to show solidarity with some of his team members who were dropped over a sponsorship issue. He returned to the team for the remaining games and scored two big knocks of 196 and 176, but was removed from captaincy indefinitely.
In November 2005, he overtook Allan Border as the overall highest run scorer in Tests when he made 226 runs at Adelaide Oval, Australia. The record was later broken by Sachin Tendulkar in October 2008.
Lara was appointed the captain of the West Indian side for the third time in April 2006, following the resignation of Shivnarine Chanderpaul. As the captain, he led his team to two ODI series wins against Zimbabwe and India. He also took his team to the finals of the DLF Cup and the ICC Champions Trophy, but lost both to Australia.
On December 16, 2006, he surpassed 10,000 runs in ODIs and became the first West Indian player to do so. He also became the second cricketer after Sachin Tendulkar to score 10,000 runs in both Tests and ODIs. He retired from international cricket following his team's exit from the World Cup after it lost a match to England on April 21, 2007.
Awards & Achievements
Brian Lara holds the record for highest individual Test score of 400 not out. He reclaimed the record after Matthew Hayden had surpassed his previous record of 375 runs.
He has scored nine double centuries in Test cricket, which places him at the third spot after Donald Bradman and Kumar Sangakkara who scored 12 and 11 double centuries respectively. Lara held the record of scoring most Test double centuries as a captain (five), but was surpassed by Virat Kohli in 2017 when he scored his sixth.
He is one of the seven players in world cricket to have scored 10,000 runs in both Tests and ODIs.
He was inducted into ICC Hall of Fame in January 2012.
Family & Personal Life
Brian Lara was involved in a long-term on-and-off relationship with Trinidadian journalist and model Leasel Rovedas. She is the mother of both his daughters, Sydney (born 1996), named after his favorite Sydney Cricket Ground, and Tyla (born 2010).
He dated Durham County Cricket Club receptionist and British lingerie model Lynnsey Ward in 2000. In 2014, he was in a relationship with Miss Scotland Jamey Bowers.
He established the charitable organization, Pearl and Bunty Lara Foundation, in memory of his parents. His father died of a heart attack in 1989, while his mother died of cancer in 2002.
Trivia
Brian Lara co-wrote his autobiography, 'Beating the Field: My Own Story', with Brian Scovell. Following his retirement from cricket, he became a golf player and won some tournaments across the West Indies.

See the events in life of Brian Lara in Chronological Order