(American Attorney, Chief Legal Correspondent for 'MSNBC' and Host of the News Show 'The Beat with Ari Melber')

Ari Melber is an American attorney and journalist, best known as the successful host of the news show ‘The Beat with Ari Melber.’ He was born into a Washington-based Jewish middle-class family. Following his high-school graduation, he earned a BA degree in political science from the ‘University of Michigan.’ He worked as an intern at a famous New York lawyer’s office after completing his Juris Doctor from ‘Cornell Law School.’ He then practiced law with a big law firm in New York City for a while. He later joined ‘MSNBC’ as a news journalist. In 2017, he began hosting the show ‘The Beat with Ari Melber,’ which has been one of the most successful shows in the history of the network. While working there, he ventured into investigative journalism and was praised for it. He also works as a regular columnist for major news publications such as ‘The Atlantic’ and the ‘New York Daily News.’ Ari has also featured as a speaker at universities such as ‘Yale,’ ‘Oxford,’ and ‘The New York University.’ While political reporting is his forté, he also invites rappers, actors, and musicians to his show for one-on-one interviews. Peter Doocy
31st March In History
DID WE MISS SOMEONE?
CLICK HERE AND TELL US
WE'LL MAKE SURE
THEY'RE HERE A.S.A.P
Quick Facts

American People
American Men
Cornell University
University Of Michigan
Male Lawyers
Childhood & Early Life
Ari Naftali Melber was born on March 31, 1980, in Seattle, Washington, U.S., to Barbara and Daniel Melber. He is of European Jewish descent. His grandparents had survived the Jewish ‘Holocaust’ during the Second World War. They somehow immigrated to the United States and settled in Seattle.
Ari was thus raised in a middle-class Jewish household. He attended a Jewish day school. Since he belonged to a minority community, he faced a bit of bullying as a kid. However, he was academically good and scored good grades consistently.

He had developed an interest in the law and order system as a kid. When he was in third grade and studying in a local school, he participated in a play about the justice system.

However, by the time Ari Melber was in high school, he developed an interest in politics. He was elected the class president. He considered it as a mildly nationalistic platform and confirmed that it was the beginning of his interest in the political system.

He decided to study politics and joined the ‘University of Michigan.’ He earned a bachelor’s degree in political science. After graduating college, he followed the same career route as most political-science graduates and became an aide of Senator Maria Cantwell.
He later joined ‘Cornell Law School’ and earned a Juris Doctor degree. His interest in journalism had grown by then. He served as the editor of the ‘Cornell Journal of Law and Public Policy.’ After obtaining his Juris Doctor degree, he served as an intern at the office of a popular public defender from New York City.
Continue Reading Below
Career

Ari Melber made his way into the office of popular New York City lawyer Floyd Abrams, who practiced the ‘First Amendment.’ While working there, he found grave loopholes in the criminal justice system of the country. He realized many black men were suffering because of a law and order system that was riddled with racial bias.

In 2008, he covered the Barack Obama presidential election campaign for ‘The Washington Independent.’

In 2009, Ari Melber began practicing law with a major New York law firm. He specialized in copyright litigation and the ‘First Amendment.’ While working for Abrams, he learned the tricks of the trade and grew into a highly competent lawyer. He also developed his journalistic skills. Abrams later said that Ari had great clarity of thoughts and showed precision in writing, which were qualities of a great lawyer.

He began his full-time practice as a lawyer and handled some high-profile cases. At the same time, he also wrote political articles for journals such as ‘The Atlantic,’ ‘The Nation,’ ‘Reuters,’ and ‘Politico.’ Soon, he was approached by the news organization ‘MSNBC,’ which asked him to appear as a guest host on their channel. However, he rejected the offer. Eventually, when he was offered a regular hosting job at the channel, he accepted the offer.
He has been hugely successful as the host of the program ‘The Beat with Ari Melber.’ The show began airing in 2017 and has been one of the most popular news TV programs in the country. The show starts at 6 p.m. on weekdays. It had once brought in more viewers on ‘MSNBC’ at that particular time slot than any other show in the network’s history.
The show has also brought more than 13 million views to ‘MSNBC’s ‘YouTube’ channel, more than any other program of the network.

Ari Melber currently works as a legal analyst for ‘NBC News’ and a chief legal correspondent for ‘MSNBC.’ His move from practicing law to entering journalism was due to his belief that a journalist can bring in a big change in the legal and criminal justice system. At ‘MSNBC,’ he mostly covers the ‘Federal Bureau of Investigation’ (FBI), the ‘United States Department of Justice,’ and the ‘Supreme Court.’ Owing to his exceptional coverage of the ‘American Supreme Court,’ he was honored with an ‘Emmy Award’ in 2016.

He also became famous for questioning the firing of ‘FBI’ director James Comey, saying it could trigger obstruction of justice. He was one of the first reporters to speak out on the matter, and as a result, in May 2017, a probe was established to look into the matter, among other cases of obstruction of justice.
He was also associated with the “Mueller Probe,” the investigation about the Russian interference in the 2016 U.S. presidential elections. He interviewed Corey Lewandowski, former manager of Donald Trump’s presidential campaign, about Trump’s interference in the “Mueller Probe.” When Corey denied Trump’s role, Ari claimed that he was lying.
Continue Reading Below
He also broke the story of a Virginia man who was killed in custody by some police officers after getting tased repeatedly. An ‘FBI’ investigation was launched immediately.
His show ‘The Beat with Ari Melber’ features interviews, news reports, and special reports. The show also airs panel discussions from time to time, anchored by Ari. The show also features a segment called ‘Fallback Friday’ every Friday.
Ari also earned appreciation for his role in calling out ‘Facebook’s role in worldwide elections and journalism. He has been called the harshest critic of ‘Facebook’ CEO Mark Zuckerberg.
Some of the most crucial interviews that Ari has conducted to date have been with senators Kamala Harris, Richard Blumenthal, Elizabeth Warren, and Mark Warner. Additionally, he has done one-on-one interviews with Trump’s political aide Sam Nunberg and special counsel Robert Mueller.

Apart from politics, Ari Melber also presents shows on arts and has invited guests such as rappers 50 Cent and Method Man and actors Sean Penn and Winston Duke.

He also writes columns regularly and has written for famous newspapers such as ‘The Baltimore Sun,’ the ‘New York Daily News,’ and ‘The Washington Post.’
In addition, he has also appeared as a speaker at ‘Harvard Law School,’ ‘Oxford University,’ ‘Yale University,’ and ‘Columbia University.’
He published a report called ‘Organizing for America.’ The 74-page-long report had been hugely appreciated by news organizations.
His investigative reporting has made its way into many books, such as ‘Power and Constraint,’ ‘Political Campaign Communication,’ and ‘Rethinking Arab Democratization.’
He has also been invited as a host on many news shows, such as ‘The Rachel Maddow Show’ and ‘Hardball.’
Family & Personal Life
In 2014, Ari Melber married Drew Grant, a reporter at the ‘New York Observer.’ However, the couple divorced in 2017, after about 3 years of marriage.
Ari travels a lot for work and currently stays at Carroll Gardens, Brooklyn.
Even though he rarely practices law now, he is still a member of the ‘New York State Bar Association.’
He is a fan of hip-hop music and sometimes uses hip-hop lyrics to explain political scenarios.

See the events in life of Ari Melber in Chronological Order 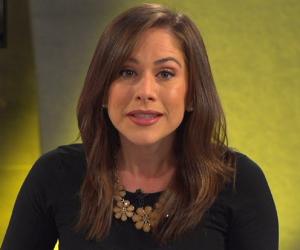